Freaking Flipper is the fourth level of the Sea of Serendipity, the fourth world in Rayman Origins. The heroes will continue to swim through the underwater caverns. The PlayStation Vita version of Rayman Origins features a Ghost Mode of this level. Even though this level is the second from this world and twenty-fifth overall that's included in the Back to Origins mode in Rayman Legends, it is the first playable level in the mode, the second being Swimming with Stars.

The heroes begin by dropping down in the water filled with presumably a school of fish. The fish sing their tune once the heroes enter the water. The first Skull Coin can be collected by swimming downwards through a tight space between two platforms. As the the heroes progresses, no more fish can be seen; there will be jellyfish and a rockfish that will try to eat the heroes by attempting to inhale them. The exit can be found not too far from here. 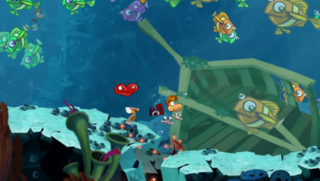 The first relic can be found below Rayman, just to the right of the tight space.

Just after the heroes enter this area, the first relic can be found below, next to a vertical tight space where the first Skull Coin is found.

The heroes will need to avoid the swordfish, which are hiding near the beginning of the area. The second Skull Coin is located around several spikes and a jellyfish. As the heroes begin to swim deeper, they will encounter more swordfish and rockfish. The first secret area can be found to the right of the first rockfish by swimming over it. The heroes will then need to swim downwards past all the rockfish in order to find the exit.

The heroes need to hurry as they defeat several kinds of enemies, as a swarm of fatal touching flying fish are following them. Once they escape the swarm and defeat the enemies, the Electoon cage can be broken.

The heroes will need to break the blocks which obstruct their path in order to proceed. The third Skull Coin can be retrieved by hitting two TNT crates and waiting for them to explode, then quickly collecting the coin before the solid wooden crate crush the heroes. Afterwards, a strong current will push the the heroes close to the exit, where they will need to watch out for the blowfish. 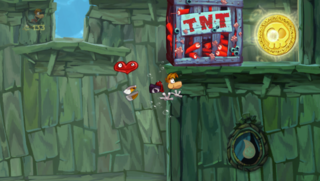 The second Relic can be found in the window below the TNT crate and Skull Coin.

The second relic can be found in this area, just below the third Skull Coin and the TNT crates.

This area tests the swimming ability of the heroes. Another strong current takes them downwards, but this time there are several sea anemones along the way. The fourth Skull Coin can be found in the middle of two anemones. After the heroes get through the current, they will need to swim deeper while passing more rockfish and sea anemones.

As the heroes enter this area, an Electoon immediately cries out for help. The second secret can be found by destroying the lower pillar at the start of the area. Once the Electoons have been saved, the heroes can proceed. Throughout the area, the heroes will encounter many of the world's enemies and pillars; some of those pillars may crush the players if their lower area is broken. The fifth Skull Coin of the level can be found by waiting for two large pillars being held by Darkroots to move out of the way, then the coin can be collected. The sixth Skull Coin can be collected by quickly destroying a part of two small pillars. The exit can be found not too from the coin.

All the heroes will need to do, is crush attack in the right spot, dropping a long distance and crushing through many blocks. Once they reach the bottom, they will also crush the Psychlops and the Electoon cage. 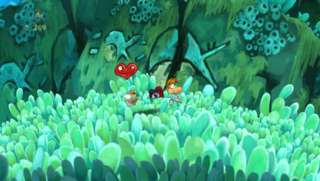 The third relic can be found in the foreground, just below Rayman's feet.

The third relic can be found in this area; it is located in the foreground, just past the jellyfish. This one camouflages with the reef, so it can be difficult to spot. 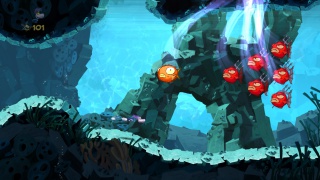 The sixth and final area.

The heroes will need to defeat the lone blowfish, and the several redfish in order to break the Electoon cage, which will end the level. Afterwards, the heroes will pose on the photoboard while the Magician waits for the amount of Lums that were collected throughout the level.