Why So Crabby? is the first level of the Angsty Abyss, a world in Rayman Origins. In this level, Rayman and his team must swim through the dangers under the sea. The PlayStation Vita version of Rayman Origins features a Ghost Mode of this level. This level is the first one from this world and twenty-seventh overall that's included in the Back to Origins mode in Rayman Legends.

For a while, the team of heroes swim through calm water and dodge some spikes that appear from above and below the ground. The first Skull Coin can be collected by getting through the current and up to where four spikes are located, next to the coin. After that, the players can swim along with the current to get to the exit.

Here, there are more currents and more spiky fishes that move around. The second Skull Coin can be acquired by swimming downwards in between two spiky fishes. Shortly after, the team must swim along with the current, battling Redfishes and Blowfish. The exit is just past a small group of jellyfish.

The first secret area can be found at the start of this area. It can be found by going up where a gap between two sea platforms are. Once done, the heroes can advance onto a rough current with many spiky fishes coming directly at them. The third Skull Coin can be collected by taking a lower path, surrounded by a bunch of spikes. Then, after continuing to dodge the spiky fishes, the exit appears. 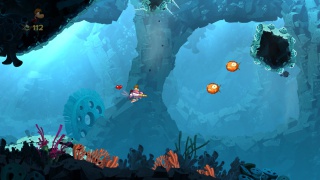 In this secret area, the team must ride on the mosquitoes to reach the Electoon cage. During the flight, they have to avoid falling platforms with spikes all around, Blowfish and purple Murrays. Once they get to the end, and defeat the four Blowfish, the cage can be broken open.

Shortly into the area, the heroes will meet an Ocean Spider. It can be defeated by timing when to go underneath and hit its bubo. Now the team will go out of the water for a brief moment. Oddly, a few Lividstones are located in this area. After a while, the fourth Skull Coin can be found by going through a hole in the water. The exit is not far away from there.

The team will now try to get past some giant jellyfish in the beginning part of this area. The second secret area is located down past a small gap and a giant jellyfish. After that, the heroes can continue on, to where they need to destroy another Ocean Spider. The fifth Skull Coin is in the middle of two Blowfish, underneath four spikes. The team now needs to avoid getting hit from the spiky fishes. The sixth Skull Coin and a Blue Punch are to the far right of the spiky fishes. A little while later, they must swim along the strong current, fighting more Ocean Spiders and Blowfish. The Blue Punch power-up can be useful to defeat the Blowfish. The exit is close by. 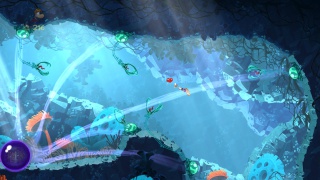 The heroes need to hit the bulb that will destroy the sea anemone. When completed, the cage can be broken open. 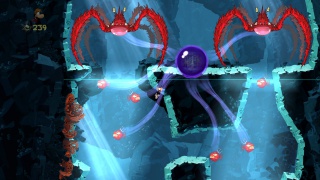 Rayman and his team of heroes need to destroy several Redfishes and Ocean Spiders in order to be able to break the Electoon cage open. Once done with both, the players will pose on the photoboard as the Magician waits for the total amount of Lums that were collected in the level.