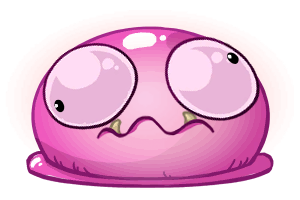 Bubos are small bubbles of nightmarish material agglomerated in the bodies of the bosses in Rayman Origins (with the exception of the giant eel and the Boss Bird). They emerge from their bodies, basically to indicate their weak spot. They appear temporarily in certain parts of the body, usually when a boss stuns himself or lowers his guard. Once Rayman and his friends pop the three bubos contained in the bodies of the bosses, they will be defeated; in the case of the four Kings, they will turn back to their normal form.

Bubos are pink in colour, have big squinting eyes and a pair of small fangs in their mouths. A variant of bubos, the mecha bubos, are founds in the bodies of the Mecha Daisy and the Mecha Mockingbird, but are almost equal to their regular counterparts in resistance and appearance, with the exception of a metallic ring surrounding them and their small eyes. The biggest bubo is found in the Land of the Livid Dead, hidden on Big Mama's head, and has the same resistance of an Electoon cage.