From RayWiki, the Rayman wiki
(Redirected from Lums)
Jump to navigation Jump to search 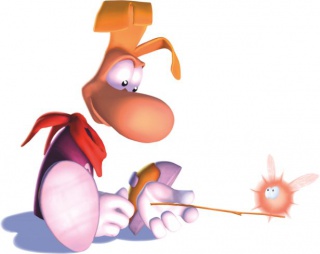 Rayman playing with a Lum.

First, you must know that the universe is made of energy. Everything that moves around you, everything that lives and thinks is given life by the tiny magical lights which we call... Lums.
—The Knowledge of the World, Rayman 2: The Great Escape

Lumz are very powerful shards of energy. Each colour has it's own special powers...
—Manual, Rayman 2: The Great Escape

These tiny, mysterious creatures will each help Rayman and Globox along in their adventures in a distinctive way.
—Manual, Rayman: Hoodlums' Revenge

A Lum is a small body (or shard) of magical energy. Lums are one of the most frequently recurring elements of the Rayman series; their first confirmed appearance is in Rayman 2: The Great Escape. There are many different types of Lums, each with their own unique functions determined by their colour. They usually appear as small lights with insect-like wings, though their appearances can vary widely: some have eyes or faces, some are shaped like rings, and some have a crystalline or metallic appearance. The name Lum is derived from the French word 'lumière', which means 'light'. Most Lums are collectibles, and must be picked up in order to activate their unique effect; however, some Lums are not. The Lums in the Game Boy Advance games often resemble Tings. In Rayman Origins, a new type of Lum appears. These Lums seem to exist outside the colour system used in the previous games, and act as a currency and energy source in the Glade of Dreams.