Look for them, they come in handy when you face the enemies that await you.
—Manual, Rayman 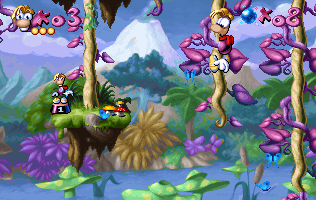 A life, as seen in the original Rayman game.

Lives are power-ups found in the original Rayman game, most versions of the Rayman Junior games and Rayman Designer, usually hidden in secret areas or activated when certain events occur. They look like small statues of Rayman, with a dark purple base and a number 1 written on it. It is possible to catch them by touching them or throwing Rayman's telescopic fist at them, once he has received the grappling fist ability. When Rayman collects a life, the player gains an additional chance to restart from the most recent checkpoint should Rayman die. Any health Rayman has lost is also restored. When Rayman loses all of his lives, the continue screen appears, giving Rayman a chance to use one of his continues to recover his lives. In most of the versions, Rayman starts with 3 lives and can receive a new one through either collecting a statue, collecting 100 Tings or winning a bonus level. 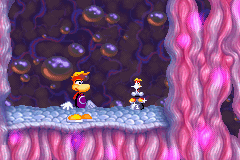 A life statue in the Organic Cave, a world in the Game Boy Advance version of Rayman Raving Rabbids.

Artwork of the scrapped life from Rayman Origins.

Lives were going to reappear in the 2D version of Rayman 2, but it was cancelled.

Although life statues do not appear in the Game Boy Advance version of Rayman 3, the White Lums have a similar function.

Lives reappear in the Game Boy Advance version of Rayman Raving Rabbids, where they are silver in colour. Here they serve largely the same purpose as they did in the original game.

In Rayman Origins, lives were intended to make a return. Instead of statues, they appeared to be plush toys of Rayman, resembling more the icon of the Wanna Kick Rayman series from Rayman 3. Lives were only seen in a beta version of the game, which also featured some other scrapped elements such as the Photographer. In the beta, Rayman could get a life just by touching special bubbles only found in secret rooms with Electoon cages. These bubbles act as roulettes, scrolling between various other items such as Blue Punches, Lums, and hearts. With good timing, the players could gather a life, which, weirdly, makes a big heart with inverted colours appear for a short period.

During final development, the lives (along with the roulette bubbles) were removed from the final version of the game. The developers decided this to get rid of the "arcade era" and provide a new and more positive gaming experience, as the player could lose as many times as necessary to gain skill without having to worry about being ejected from the game.[1] This may suggest that lives won't appear in future games of the Rayman series.