Red Globox is a playable character in Rayman Origins, Rayman Legends, Rayman Fiesta Run, Rayman Adventures and Rayman Mini. Before the events of Rayman 2, and even possibly before knowing Rayman, Globox was a Vubooduboo-­practicing Red Wizard with red skin. Nobody in the Glade of Dreams seems to know what really happened to Globox when he became blue; while the other Red Wizards of his clan whisper rumours about him being poisoned by venomous bubeastietubbis, the Teensies believe that his colour chance was produced by excess of plum juice. The artbook The Art of Rayman Origins seems to corroborate the former version: while he was eating some berries from a bush, Globox confused a blue mosquito's eye for a berry, and after failed attempts to take the eye, he swallowed the mosquito whole. Once inside Globox's body, the mosquito buzzed noisily for help, and immediately a swarm of blue mosquitoes appeared to sting Globox, leaving him with several blue welts, which eventually became part of his skin. This story is later reused in the PlayStation Vita version of Rayman Origins as a mosaic puzzle, where it is obtained by collecting relics in the game.

Red Globox is Globox, but with red skin instead of blue. It is unknown whether he is a younger, a cured, or just a disguised version of Globox. 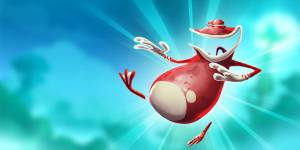