The Hoodboom is a grenade launcher. He's the only Hoodlum who can count up to 3. These top-flight mathematicians also love writing poetry. Their anthology, entitled Don't Take It Anti-Personnelly, has sold more than ... well, more than 3 copies, that's for sure.
—In-game description, Rayman 3

It's hard to say where exactly the Hoodbooms' allegiances lie: with the Dark Lum Lord or with the firebombs they crave to set off. Striving to create the biggest explosion ever recorded, Hoodbooms craft explosives with a demolitionist's skill, only to detonate them with a maniac's glee. It's no wonder Hoodbooms can turn almost any household item into a high explosive, their favourite being a jug of plum juice.
—Press release, Rayman 3[2] 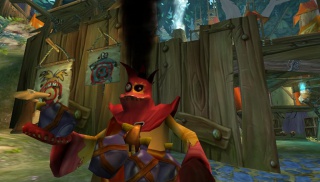 Hoodbooms are a similar shape to Hoodmongers, but feature bright red-and-yellow colouring, a scarecrow grin and a distinctive, scorched head, from which a pillar of smoke occasionally billows. Rather than the crude blunderbusses used by their Hoodmonger brethren, Hoodbooms arm themselves with explosive jugs of plum juice, which they can throw over great distances. They always carry a large number of them on a strap around their torso. Hoodbooms first appear in Clearleaf Forest, and feature in most following levels. In the Hoodlum Headquarters, Hoodbooms are also released by the Horrible Machine, two at a time.

They are somewhat maniacal and can often be seen laughing crazily and juggling their explosives. However, despite outward appearances, Hoodbooms are considered to be the most intelligent of all Hoodlums, as they are the only ones able to count to three. Hoodbooms are also known to write poetry; one Hoodboom wrote an anthology called 'Don't Take It Anti-Personnelly' which proved quite popular with other Hoodlums, having sold well over three copies.

Hoodbooms often stand in high places where they cannot be reached without the aid of the Shock Rocket; they usually laugh in their high-pitched voices while throwing bombs down towards Rayman. However, even grounded Hoodbooms are not easy to defeat; they are twice as resistant as Hoodmongers, and when punched, they grow angry and begin to throw a large number of jugs at once, making it difficult to avoid being damaged by them. Some Hoodbooms stand on stilts in order to avoid attacks, but are susceptible to being brought down by the Vortex fist. These are known as Stumblebooms.

Hoodbooms also appear in some of Rayman 3's minigames, most notably Sentinel, in which the player controls a Hoodboom using his plum juice jugs to guard a tower from angry Knaaren.

Rayman: Hoodlums' Revenge also features Hoodbooms. While their appearance and their tactic remain unchanged, they are twice as weak as before, taking only three punches to be defeated.

Hoodbooms act very similarly to the bomb pirate from the original Rayman game. 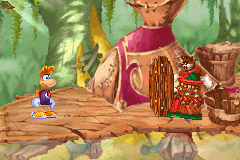 In the Game Boy Advance version of Rayman 3, shielded Hoodbooms appear in the first part of Hoodlum Hideout and are shown throwing explosive bottles of plum juice at Rayman while holding a large, wooden shield, which can be destroyed by Rayman's telescopic fist. In the second part of the same level, different shielded Hoodbooms appear, carrying impenetrable metal shields, which Rayman has to circle.