Red Wizards are a clan appearing so far in Rayman Origins. The oldest Red Wizards assume the role of fakirs who worship Polokus and can usually be found meditating cross-legged in the air, while the younger Red Wizards are simply regular inhabitants of the Glade of Dreams, much like the Teensies in other Rayman games. Rayman's best friend, Globox, was originally a Red Wizard; however, he lost his original red colour, and became blue as a result of some unusual incident. As a response, the Red Wizards started several rumours about Globox being poisoned by venomous bubeastietubbis; however, the artbook The Art of Rayman Origins, indicates that Globox became blue after being stung by a swarm of blue mosquitoes. The original Red Globox, as he looked before the incident, is one of the unlockable skins in the game.

As members of his species, Red Wizards closely resemble Globox, with webbed feet, a prominent belly, a wide mouth and small eyes. While Globox's body is blue and white, the Red Wizards are dark orange and white in colour, and have long, light-orange hair. Their fakir variants can usually be found levitating cross-legged in mid-air, with their beards dangling to the ground below them; the player characters can grab their beards and swing from them. The young members of their species seem to have no legs at all, their feet floating disconnectedly like Rayman's. Most of the Red Wizards have ponytails on their heads, and wear green bandage-like clothes around their waists, usually decorated with clam shells. 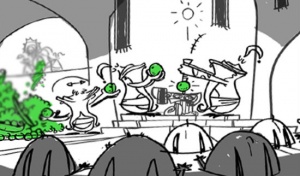 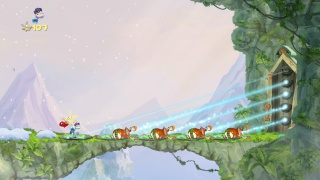 According to an early concept, The Red Wizards' duty is to assist their master, the Bubble Dreamer, to turn into a real mature god by forcing him to follow the useless ritual of sacrifying peas to stop the nightmares that invade the Glade of Dreams. It is possible that the concept is still going, and the Bubble Dreamer is just avoiding them at the Snoring Tree with his friends. Some Red Wizards stay at the Mystical Pique with the fakirs, while others have their huts on stilts above the Sea of Serendipity. Most of the Red Wizards can be seen being trapped by Facehugger Darktoons and Rayman can optionally save them by jumping on their heads. When the Darktoon is bubblized, the Red Wizard performs a gleeful dance and jumps away, leaving the stage. If Rayman saves all of the Red Wizard in Port 'O Panic he will unlock the Achievement/Trophy No Panic! (Only available for Xbox 360 and PlayStation 3). In the level 'Moseying the Mountain', Rayman has to free a group of caught Red Wizards, and wall run with them to the top of a mountain, where they will find a door. In order to open it, Rayman has to play an invocation minigame, where he has to bow at the same time the as the Red Wizards by moving the analog stick up and down. With good timing, Rayman will earn several Lums during this minigame. In the same level, Rayman can interact with these Red Wizards by slapping them; however, they will slap Rayman back, much like the Green Teensies at the beginning of the level 'Riding the Storm'. A common glitch occurs when a Red Wizard is pushed into the door; the Red Wizard will appear in the next room, but if Rayman attacks him, he will be unable to stand up again to respond.