Moseying the Mountain is the first level of the Mystical Pique, the fifth world in Rayman Origins. This is where the heroes meet the fifth and final nymph, Helena Handbasket. Once the heroes save her from the jaw of a Darktoon, she gives them the power to run on walls. This level bars environments from both Jibberish Jungle and Mystical Pique. The PlayStation Vita version of Rayman Origins features a Ghost Mode of this level. This is the first level from this world and sixteenth overall that's not included in the Back to Origins mode in Rayman Legends.

Upon entry, an Electoon can be heard crying for help. The first secret area can simply be found by going to the left and jumping up to the platform which leads to the entrance. Once the Electoons are saved, the heroes can begin to advance, while carefully avoiding Darkroots. The first Skull Coin of the level can be collected by properly timing a crush attack to a flower bumper from a vine, which is in between two Darkroots. The exit can be found to the right of the coin. 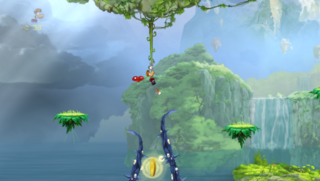 The first relic can be found just above the vine which Rayman is holding onto.

The first relic can be found in this area, directly above the Skull Coin.

The heroes will need to defeat the many Lividstones throughout the area while avoiding the Darkroots. Once all the Lividstones have been defeated, the cage can be broken.

This is where the heroes spot Helena Handbasket, who is held captive by a Darktoon. The heroes will need to chase the Darktoon as it runs away from them. Along the way, the Darktoon will run up walls, foreshadowing the next permanent power Helena will grant the heroes once she has been saved. The second Skull Coin can be collected by quickly crush attacking the first flower bumper to the right, in order to reach the coin before the Darkroots block it. Occasionally during the chase, the heroes will need to take alternative paths, as the route that the Darktoon takes can only be taken if the heroes have the power to wall run. After ascending further, the heroes will need to fly higher with the help of an updraft. While they ascend, the third Skull Coin can be retrieved by flying to it as they approach the top. Eventually, the heroes manage catch up with the Darktoon, where they are able to defeat him, receiving the aforementioned power to run on walls from Helena. The new power will prove useful to the heroes, as they will need to reach a switch above them in order to open the door which leads to the exit. 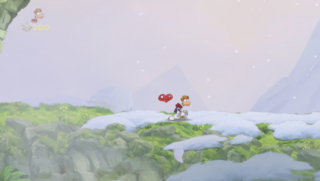 The second relic can be found just below Rayman, camouflaging with the snow.

The second relic can be found in this area, just after the heroes pass the area where they meet the Red Wizards.

The heroes enter a strange area, filled with spikes and meditating Fakirs. Throughout the area, the heroes will need to use their newly acquired power to run on walls in order to avoid the spikes and Darkroots. The fourth Skull Coin is located above a zip-line and a couple Darkroots. There are a couple of Red Wizards with Darktoons attached to their heads, though defeating them is not a requirement. The exit can be found nearby.

Once again, the heroes need to run on walls, but while destroying the ice blocks which block their way. Afterwards, the second secret area can be found by using a meditating Fakir's long beard, then running up a wall to reach the entrance. After freeing the Electoons, the heroes can proceed to reach a platform filled with Darktoons, one attached to a Red Wizard; the fifth Skull Coin can be found hiding just above the platform. The heroes will then need to run on a loopy platform; a wall platform will rise up, and more Darktoons will appear near the exit. The sixth coin can be collected right above the exit, by running up a wall which leads the heroes to it. 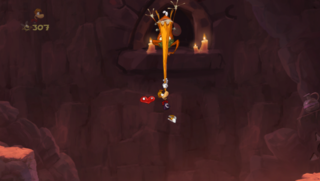 The third relic can be found behind the fakir, just to the right side of it.

The third relic can be found in this area, it is located in the background behind a fakir. 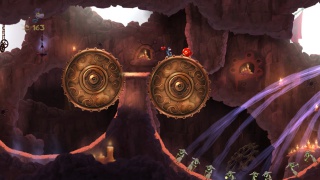 All the heroes will need to do is reach an explosive bulb and attack it to make a large rotating platform move, squashing the Lividstones underneath. Once completed, the cage can be broken. 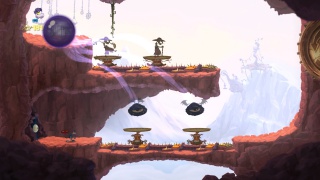 The final area of the level.

The heroes will need to destroy the bouncing Psychlops first, then run on a loop-d-loop to make it rotate, causing a vine to move towards the heroes. Using the vine will help reach the Lividstones, which will also need to be defeated in order to break the Electoon cage and complete the level. Once they have been defeated, the heroes will pose on the photoboard as the Magician waits for the total amount of Lums that have been collected throughout the level.