Tarayzan is a character who appears in the original Rayman game. As his name suggests, Tarayzan is a pastiche of Tarzan combined with Rayman. He is clearly a member of Rayman's species; apart from his black hair, earring and leopard-skin toga, he looks almost identical to Rayman.

The Swamps of Forgetfulness 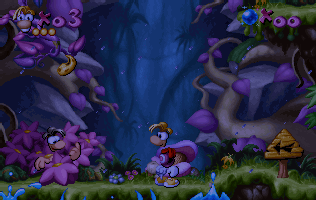 Rayman must help Tarayzan to get his clothes back.

Rayman first meets Tarayzan in a rainy area that is the first part of the Swamps of Forgetfulness, the third level in the Dream Forest. Tarayzan has lost his toga after getting it caught on a branch, and is now hiding behind a bush, embarrassed at his nakedness. He can be seen murmuring and pointing awkwardly at his clothing. When Rayman jumps up and punches the toga, it falls and flutters down to Tarayzan, who puts it back on and is now able to leave the shelter of the bush. As an expression of his gratitude for Rayman, Tarayzan gives Rayman a magic seed, which can be used repeatedly to grow huge flowers. Tarayzan then yodels and leaps back up amongst the trees. When Rayman first plants the magic seed, a rising flood (accompanied by morbid music) starts, and Rayman must use the seed repeatedly in order to ascend to the exit sign and escape the water.

In Rayman Gold, his voice can be heard. He speaks very quickly and high-pitched, saying "Hey Rayman! Take this magic seed!". Tarayzan (top-right) with Rayman's other friends. 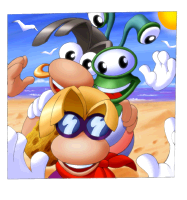 Tarayzan on holiday with Rayman and Joe the Extra-Terrestrial after the events of the game.

Tarayzan is seen again in the game's epilogue screen, where he is celebrating Rayman's victory along with all of the other friendly characters. He later goes on holiday with the other characters, and is seen on a beach with Rayman and Joe the Extra-Terrestrial in one of the photographs displayed during the end credits.

Tarayzan! Love the leopard-skin...! How's it yodeling? Hey...pass me a magic seed and we'll bust out of this bird's nest! All out, huh? Nevermind. Play that funky music! yodelayheehooo!

Tarayzan! Ray's cuz from way back...whenever! Glad to see you didn't lose your leopard skin this time round.. Awk-ward...

Tarayzan was going to be an unlockable skin in Rayman Origins, but he was removed from the final game. The Bubble Dreamer refers to him as Rayman's ‘cuz’, though it is not clear if this is meant to denote a literal kinship. If Tarayzan is Rayman's cousin, he was presumably created by one of Betilla's nymph sisters; the Bubble Dreamer mentions that they have cooked up other ‘recipes’ than Rayman. Repeated reference is also made to events in the Swamps of Forgetfulness, including the incident with the leopard-skin and the magic seeds.