After Rayman escapes from the Rabbids and their Colosseum in the previous game, the Rabbids decide to invade Earth, particularly in Paris, France. The event as it was happening was being covered on TV, with Rayman watching it. He heads to Earth himself to stop the invasion. Rayman finds a mall that is taken over by Rabbids. To avoid suspicion, Rayman loosely disguises himself as one of their own. As the hero safely reaches the top of the building, he oversees a herd of Rabbids watching clips of human life. A Rabbid spots Rayman, surprising him as he falls through an opening into the mall. Surrounded, a Rabbid with split colour eyes tries to tell if the intruder is Rayman or not. In order to take away the rising suspicion, Rayman (who had injected helium earlier to alter his voice) does the Rabbid scream and the spilt coloured is convinced it is a false alarm. Rayman is then directed into a flying submarine to a location for Rabbid invasion.

After Rayman completes all of the minigames, a Rabbid is seen guiding a submarine full of dressed up Rabbids as it is parking. Later, a notice was taped onto the submarine, as the area they parked at was a no-submarine-zone. Rayman does not appear in the ending of the game.

The main setting in the game is the shopping mall the Rabbids have taken over. From there the player can go do Trips, listen to music unlocked in minigames, customize Rayman and the Rabbids, and make a customized trip.

This game features Rayman and the Rabbids. Compared to the previous game, the game focuses more on the Rabbids and less on Rayman. In this game, Rayman acts like a Rabbid in order to keep himself unnoticed. The Rabbids are now more human like than they were in Rayman Raving Rabbids, doing human things and even having their own crazy way of speech. 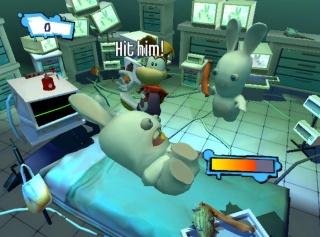 One of the minigames involve hitting a Rabbid until he falls asleep.

In the game the player can choose from Trips Mode, score mode, Trips customization or the Plaza. In Trips mode there are 5 different areas to visit. he player then takes part in 5 randomly chosen minigames and a music one as the area's final. In score mode, the player can replay the 45 minigames that have been unlocked in Trips and try to beat the high scores to unlock more Rabbid costumes. Trips customization lets the player create up to three of their own trips and play them from the Trips menu. Lastly is the Plaza, where the player can view the credits, listen to unlocked music, play some FPS Plunger Shooters and customize Rayman or the Rabbids with more than 110 items of clothing. Rayman only has 9 costumes while the Rabbids have around 50. Also new to this game is the choice of easy mode or normal mode in both Trips and score mode and simultaneous multiplayer in all of the minigames.

The Plunger Shooters (previously known as Bunny Hunts) are different from Rayman Raving Rabbids. Instead of polygon made worlds, they now take place in real world locations. The controls of how to use the plungers are different, and the grapple ability is removed.

The music stages have changed too. Instead of dancing to the music, the player now plays it. The player can choose from 4 different instruments and instead of Rabbids coming from the sides of the stage, it is now Wii Remote and Nunchuck symbols coming down from the top of the screen and when they get to the templates at the bottom of the screen, the player must strike down whichever controller the symbol is of at the moment needed to score points. Nunchuck symbols are always at the left and Wii Remote symbols are always at the right. At certain times it will tell the player to either move the Nunchuck and Wii Remote up and down, swing the Wii Remote like a lasso or swing the Nunchuck like a lasso.

Are We There Yet? 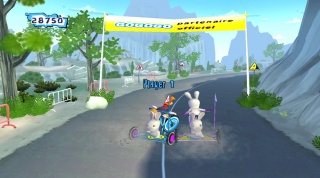 At the end of each minigame and trip, there is an icon for Nintendo Wi-Fi Connection. If the player has internet connection for their Wii, they can send their score to www.ravingrabbids2.com. The player can then compare their score with those of other players and try to beat them. Top 3 players in the world are listed in each minigame section. Since an unknown date, this feature no longer works. 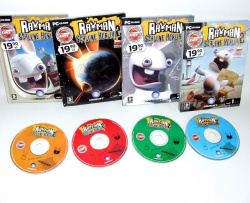 Rayman Raving Rabbids 2 was also released on PC. Gameplay mechanic was simplified, The Plunger Shooters and minigames with too complicated Wii control were removed, appearance customization was changed to a selection of prepared by developers characters. The number of playable games has been reduced to 16.

One of the PC ports was released in Poland by Komputer Świat Gry. The game was split into 4 parts, one contains 4 levels (16 total). The disc was added with the book which described how to play and installation process. Later, edition with all 16 games has been released.

The promotional disc from Cheese Heads (food product) included 4 minigames, although all 16 could still be accessed by launching the game with different launch arguments.

Version with multiple languages (English, French, German, Italian and Spanish) which contained all 16 minigames was also released but by now publisher is unknown.