Bzzit is a character who appears in a number of games in the Rayman series. He is a giant mosquito, but he is much weaker than his counterpart, Moskito, whom he is often mistaken for by players because he shares his appearance and colours in most versions of the original Rayman game.

Several mosquitoes make an appearance in the Rayman 3 minigame 2D Madness and in the Dreamy Forest race track of Rayman Kart, though Bzzit does not appear to be among them. 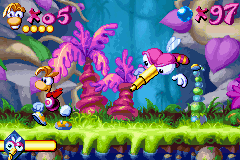 Bzzit first appeared unnamed in the original Rayman game, where he is encountered in Anguish Lagoon. He is the first mini-boss, and once he is defeated by Rayman, he collapses and starts sobbing. Rayman stops his victory dance to comfort him, and they soon become friends fast, Bzzit helping him cross the rest of the lagoon by offering a ride on his back. In the Atari Jaguar version of the game, he can shoot balls of energy with his proboscis.

As a boss, Bzzit is always airborne, but has less than half of the health points Moskito has, making him much weaker. He attacks by swooping horizontally at Rayman, sometimes at his head level (where Rayman can hit him head on) or near the ground (he can hit him by throwing his telescopic fist and then ducking immediately), and by stinging him with his proboscis. He also tries to dodge Rayman's attacks using his small wings, and every time he is hit, he flies high in the air and out of view for a brief moment before attacking.

In this game, Bzzit is a mosquito with no connecting appendages; having his head, gloved hands, wings and round feet floating independently from the rest of his body. Like all mosquitoes, Bzzit has large round eyes and proboscis, while also having two stripes on his purple body. His proboscis, antennae (which are only seen in some artwork), feet and stripes are golden.

In the original version of Rayman 2, mosquitoes, members of Bzzit's species, make brief appearances in the Woods of Light. In the Dreamcast version of Rayman 2, these mosquitoes also appear in many other levels throughout the game. In Rayman Revolution, Bzzit himself makes a reappearance. He is first mentioned by a baby Globox in the Minisaurus Plain, who tells Rayman that the pirates have captured his friend Bzzit; later, the Teensies at the Teensie Circle in the Minisaurus Plain tell Rayman that Bzzit is being held prisoner in a forcefield (akin to the one Ly was held prisoner in at the Fairy Glade) in the Bayou. He is the only one who can ferry someone from the Pier to the Lost Island (the location of the Sanctuary of Water and Ice in this version), so when Rayman saves him, Bzzit gladly offers him to hop into his boat and take him to the island in search of the first of Polokus's masks.

In this game, Bzzit has four insect-like legs instead of the floating hands and feet which he had in the previous game. He is also noticeably smaller than before.