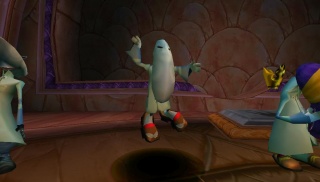 Gonzo in the Longest Shortcut.

Gonzo, also known as Garatta Ciatik,[1] Art Rytus[2] and Anna Lyse, is a Teensie with slanting eyes and the ability to levitate, is the third and final Teensie doctor and lives in the Desert of the Knaaren. Helped by Otto Psi and Roméo Patti, Gonzo exorcises André from Globox's body. Whereas Otto has an exaggerated German accent and Roméo a stereotypical surfer/hippie accent, Gonzo speaks with a Japanese accent, and even calls Globox ‘Globox-san’ upon their first meeting (‘-san’ being an honorary term in Japanese). Gonzo's meditative nature and slanted eyes also contribute to his Japanese stereotype.

Journey to Gonzo's office – the Desert of the Knaaren

Gonzo is the last of the three Teensie doctors to be introduced, not being mentioned until Rayman and Globox encounter the second doctor Roméo Patti, almost halfway through the game. Roméo is unable to extract André from Globox's brain, but tells Globox he knows someone that can help him. Roméo then activates a portal which takes Rayman and Globox to the Desert of the Knaaren, where Gonzo's office can be found.

The trek through the Desert is difficult for the two, as they are captured by the Knaaren and Rayman is forced to fight their champion, Reflux. Once Rayman overcomes him, however, he gains the respect of the Knaaren king Gumsi, and is granted the Power of the Leptys as a reward for his prowess. He and Globox are then allowed safe passage to Gonzo's office.

In Gonzo's office – the Desert of the Knaaren

Arriving at the office, Rayman and Globox find it under attack by a small group of Hoodlums. Rayman is unable to reach the Hoodlums due to a pit in the centre, but can use foot switches to bring pillars in the ceiling down upon them. Having crushed the Hoodlums, Rayman continues to meet Gonzo. Globox, however, does not wish to be treated by yet another Teensie doctor and attempts to flee, only to be grabbed by Rayman's LockJaw and dragged in to see Gonzo.

Gonzo hovers down from above Globox, and shortly after a few words begins to repeatedly tap on Globox's eyes with a stick. André then voices his displeaure of leaving Globox's body, which contasts with his feelings throughout the previous levels, where he wanted very much to escape Globox's body. Gonzo takes this as a challenge and quickly summons Otto and Roméo, to perform group therapy. The three Teensie doctors together accomplish what each alone could not: with Gonzo conducting, the trio perform a musical number that causes André to flee from Globox's body. However, he escapes before any of the characters have a chance to stop him.

At the Longest Shortcut

When it is discovered that André and Reflux have joined forces, Gonzo, along with Otto and Roméo, takes Rayman and Globox to the Longest Shortcut, a lengthy enemy-free puzzle-based passageway which they can hopefully use to catch up with the two villains. After instructing the heroes, the three doctors vanish.

Gonzo, together with Otto and Roméo, makes one final appearance at the end of the Longest Shortcut. When Rayman and Globox reach the docks at the end of the level, Roméo and Otto tell them, somewhat unsympathetically, that Reflux and André have escaped, and are now intent on summoning the Leptys with the Sceptre André persuaded Reflux to steal from his king, Gumsi. Gonzo, however, offers the two a ship with which to pursue Reflux and André. Rayman and Globox accept this offer and set sail for the Summit Beyond the Clouds. Gonzo and the two other doctors are not seen again.