In the Game Boy Color versions of Rayman and Rayman 2

In these games, bats do nothing but patrol in a limited area, often in pairs.

In two levels of the Game Boy Color version of Rayman, Fiery Depths and Dark Legacy, bats carrying rings can be found. When Rayman grabs onto, they go and stay up. When he lets go, they go down. They can also hurt Rayman.

In the Dreamcast version of Rayman 2

In this version of Rayman 2, bats are more common; however, they are no longer enemies, and serve merely as background elements. When Rayman approaches them, they take flight and flutter towards the screen, then disappear. Rayman cannot kill them in this version.

Bats are most abundant in the Tomb of the Ancients. They fly quickly and prove difficult to hit, which counters their lack of resistance – they can be killed in a single shot. They can also be found in the Ray-Type Challenge, along with piranhas, Robo-Pirate missiles, Boss Chenilles and Foutch.

Bats are seen as background characters in various levels of the game, but Rayman cannot interact with them. They also appear in the cinematic after the battle against Razoff in the Bog of Murk, where they have red glowing eyes. 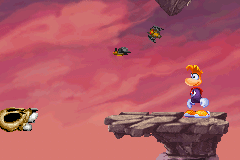 Bats as seen in the Game Boy Advance version of Rayman 3.

In the Game Boy Advance version of Rayman 3, bats also appear, but merely as background characters. 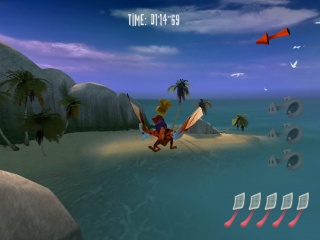 Rayman riding a bat and searching for piglets.

Bats play a much larger role in Rayman Raving Rabbids than in any other game; they appear in two minigames, Bunnies Don't Like Bats part 1 and 2. By whacking the bat with a spatula makes it accelerate and it can also pick up pigs to put in pens. In part two, Rabbids start stealing the pigs so the player has to pluck them out of the Rabbid's hands. They appear orange in this game and are big enough for Rayman to ride. 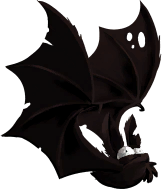 A bat as it appears in Rayman Legends.

Bats make in appearance in Teensies In Trouble, the first world in Rayman Legends.