A helicopter bomb is a type of bomb encountered in many games throughout the Rayman series, most notably in Rayman 2. These bombs fly by means of a mechanical helicopter similar to Rayman's signature helicopter power. They can either fly directly towards him, and explode upon impact, or remain static, they will deal damage to the player if they should come into contact with them. Most of these bombs are manufactured by the Robo-Pirates, though some helicopter bombs which appear in the Game Boy Advance version of Rayman 3 may be the creations of Hoodlums. In Rayman Origins and Rayman Legends, it appears that the Nightmares are now capable of manufacturing them. In many of the games in which they appear, warships can despatch them. 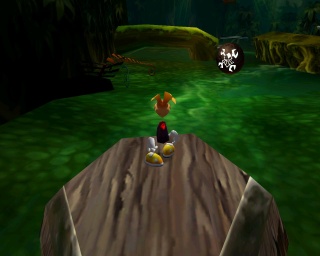 A helicopter bomb flying towards Rayman in the Bayou.

Helicopter bombs act as homing mines, being able to close into Rayman's position, and exploding on impact. They see heavy usage during the warship pursuits of Rayman in the Bayou and the Precipice, but also feature in other levels. In the Marshes of Awakening, there are helicopter bombs which act more like stationary mines, and cannot move towards Rayman, but still act as considerable obstacles in his path, as coming into contact with one while waterskiing will cause Rayman to drown.

In most of the versions of Rayman 2, the helicopter bombs explode immediately when hit by Rayman's magic fist, and explode with fire. However, the explosion graphics in the Rayman Revolution are different: the bombs explode with smoke instead, just as the homing missiles fired by the Red Henchmen 800 in the same version. Some Red Henchman 800s and Purple Henchman 800s are capable of firing helicopter bombs in the Dreamcast version of Rayman 2.

A hologram of several helicopter bombs is used to represent the Bayou. These holograms appear whenever Rayman approaches the Bayou's Spiral Door in the Hall of Doors. The holograms float towards Rayman and explode as they draw near to him, but they do no harm. In the PlayStation version, the Hall of Doors has been substantially redesigned; the helicopter bombs are now used as a symbol for the Fairy Glade. This makes them the only object used to symbolise multiple levels.

Helicopter bombs are extremely common, and can be found in most levels: Fairy Glade, Marshes of Awakening, Whale Bay, Sanctuary of Stone & Fire, Echoing Caves, the Precipice and Sanctuary of Rock & Lava.

The Glue Bomb used in the Lum Fight is very similar to the helicopter bomb. It is smaller, has a timer that counts down 10 seconds on it, and spins around the player until it blows up or is passed onto another player.

In the handheld versions of Rayman 3

Helicopter bombs see use by both the Robo-Pirate and Hoodlum armies, they come in different varieties and their properties differ.

The first variety is used by the Robo-Pirates have a similar appearance to the helicopter bombs seen in Rayman 2, and akin to them, can be destroyed by a simple punch from his telescopic fist. They can be encountered stationary or patrolling a set area.

The second variety is used by the Hoodlums and is impervious to Rayman's attacks, and can only be dodged to prevent damage being inflicted. These have a more silvery-metallic appearance, and are also adorned with spikes. They can be encountered stationary or patrolling a set area.

The third variety is of a conical shape, with grey and red colouration. These bombs remain static until Rayman enters their vicinity, after which, they will swoop down on him in an attempt to make contact and explode. They must either be dodged or shot at to avoid damage. Due to their construction, it is possible that this variety is also manufactured by the Hoodlums, as it possesses a similar aesthetic their silver-metallic ones.

The fourth variety is used by the Grolgoth, encountered at the Heart of the Ancients. The first phase of the battle with this machine involves a similar tactic to the original boss fight from Rayman 2. where Rayman must push back the oncoming helicopter bombs until they make contact with and damage the Grolgoth. The Grolgoth can also fly into the air and drop helicopter bombs from above, these must be avoided or repelled, it will also repeat this attack when it has one hit point remaining in the second phase of its battle.

The helicopter bomb makes appearances in levels 5, 6 and 7.

There are two types of helicopter bombs which are encountered over the course of the game.

The first type of helicopter bomb is made of wood and metal, and has three retractable propellers, they deploy at regular intervals. This type of helicopter bomb can be seen as obstacles in Hi-Ho Moskito! and Shooting Me Softly. Bombs with a similar appearance to these types appear in Port 'O Panic, but without propellers, these bombs may be encountered alight or spraying vast jets of flame, both of which will cause damage to the player should they come into contact with them.

The second type of helicopter bomb resembles those used by the Robo-Pirates in Rayman 2, with a skull emblem adorning their surface. Much like the first type of helicopter bomb, they have three retractable propellers, and can be seen as obstacles in Riding the Storm and Shoot for the Stars. Unlike the first type of bomb, when these bombs explode, they will emit a set of fireballs which travel in all directions, and must be expertly manoeuvred around to prevent damage being inflicted. Warships can also be seen firing propellerless versions of these bombs as cannonballs in Port 'O Panic and Pirate's Treasure! these are often used to destroy bridges and platforms in an attempt to impede the player's progress.

Behaviour-wise, both are static, and will wait until an object has come into contact with them, this will cause them to explode. They will also explode if shot at repeatedly, and will have a more unstable appearance as more shots are fired at them. Both can also be sucked up by a mosquito, who can then fire them back out at enemies, allowing for small clusters of enemies to be effectively eliminated at once. 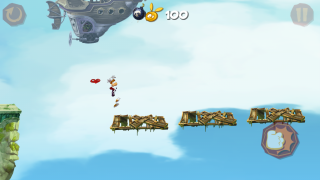 In the Pirate Ship level pack, two levels; Boom! Booomm! and You again! feature a warship, this warship is capable of shooting propellerless bombs adorned with a skull, much like in Rayman Origins.

Both varieties of bomb seen in Rayman Origins can also be found in their respective levels that were remade for the Back to Origins mode.