I'll talk to Voodoo mamma about reversing that spell.. Oh! You're cool with it! ha ha ha! Oh, yeah! If you get cravings, consult a voodoo mamma fast!
—Bubble Dreamer, Rayman Origins

Did the Voodoo mammas find a cure for your blues? Hee hee hee! Now that you're incognito...go crazy!
—Bubble Dreamer, Rayman Origins

Big Mama is a gigantic pink tentacled monster who acts as the optional final boss of Rayman Origins, and the final boss of the Back to Origins mode of Rayman Legends. She is fought in the Land of the Livid Dead, a hellish underworld and optional final level which can only be accessed by collecting all of the Skull Teeth in the game. Several editions of The Daily Bubble showed a middle-aged female member of Globox's species, known as Mamma Hité, who bore a strong resemblance to Big Mama (and is still mentioned by the Bubble Dreamer); however, in the final version of the game, Big Mama turns into a nymph called Voodoo Mamma when she is defeated, and Mamma Hité is never seen.

As her name might suggest, Voodoo Mamma is referred to as the fairy of the Land of the Livid Dead. She appears as a gothic nymph. She has numerous tattoos on her legs. She sports a pink dress, with a hairy skull on the front. She has spiky, golden wristbands, (not unlike her monster form) with a hairy skull hanging from each ear. Her hair is purple, with three ponytails with bones on the end. Unlike the nymphs who have all fairy wings and large bust, she has small bat wings and small breasts. She also has a pretty deep voice. 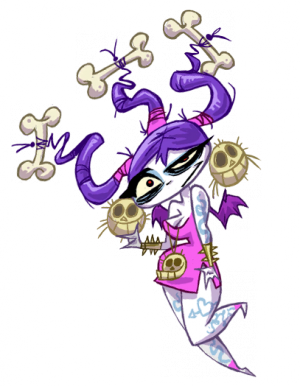 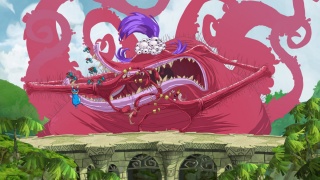 That was a nightmare... Thanks!
—Voodoo Mamma, Rayman Origins

Big Mama was first revealed in the game's announcement trailer, where she is seen battling Rayman and Globox in the Mystical Piques. Later artwork shows her tentacles descending from the clouds above the mountain, suggesting that the players would have to climb to reach her. However, in the final version of the game, the battle with Big Mama was relocated to the Land of the Livid Dead. When Rayman, Globox, and the two Teensies enter Big Mama's lair, she is painting her nails while singing (her voice here is provided by Christophe Héral's aunt).

At one point it was stated that Big Mama's monstrous roars had been provided by series creator Michel Ancel, but this may have changed during the development of the game, as she sounds distinctly feminine in the final version. Gabrielle Shrager, the lead writer of Rayman Origins, voices Voodoo Mamma.

She is also references in some of the character descriptions. 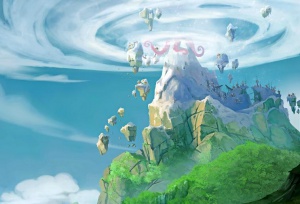 In Rayman Jungle Run she appears in some of its artwork. On those pictures she seems to be good friends with Rayman. She also has a long piece of hair between her eyes which was not previously seen. It is also revealed that Voodoo Mamma's title in nymph form is Fée de la Mort, which is French for 'Death Fairy'.

To play a joke on his friend, Rayman asked Voodoo Mama to paint him like Globox with a spell. There's only one problem, he doesn't know how to get rid of the spell...
—In-game description, Rayman Legends

In Rayman Legends she appears in the final level of Back to Origins, which takes place in the last phase of the Land of the Livid Dead, now titled The Mamma of All Nightmares. Unlike Rayman Origins, her nymph form isn't shown after she is defeated. This was most likely done to avoid spoilers.

She is also references in some of the character descriptions.