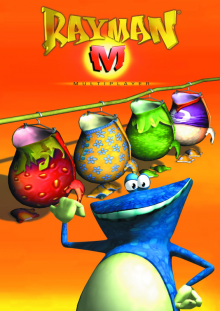 Skins are alternative options which can be used to modify the appearance of a character in Rayman M and Rayman Raving Rabbids. They usually serve as aesthetic options only, and have little or no bearing to the plot in which they feature in.

Skins are unlocked in Rayman M and Arena. Most of the characters earn them in Rayman M, but all characters get a skin in Rayman Arena. Each character unlocks up to three skins in Rayman M, but in Rayman Arena, all competitors have four skins each, except for Dark Globox, Rayman, Tily, Razorbeard and Razorwife, who only get one. Each skin (but Rayman's) changes the beat for the character's theme to what it is most suited to (e.g., Globox has his strawberry skin and is racing in the Extreme League. The beat for the Extreme League racing is fast, and the beat for the Advanced League is light and watery. Globox's skin will change the beat from the Extreme League to the Advanced League.). But if it is in its League, it will change to the Beginner League's beat (thumping in the background). The skins do not have this effect on battles. It is unnoticeable, but may be true that the skins in their league make the event slightly easier.

The PlayStation adaptation; Rayman Rush claims that there are skins included in the game, however, no skins are known to be accessible, and characters only have their one normal skin.

Rayman's only alternate skin is Dark Rayman, who is exclusive to the Gamecube and Xbox versions of Rayman Arena.

Razorbeard's first skin is him covered everywhere with very dark navy blue, apart from his buckle, which is gold, and his eyes, which are glowing red. The second skin is all of his clothes are coloured blue and white in stripes, his hat is completely blue, apart from the skull and crossbones which is white, he also has a slight shade of blue on his head. The third is all his body rusty with clothes colored red and the fourth is his hat and clothes all in black.

Globox's Advanced League skin is him having a strawberry colour scheme skin. His Expert League skin is him wearing Rayman's shirt, which doesn't fit him, and Rayman's topaz colour skin. His Extreme League skin leaves on his head and the same colour skin for his body, making him look almost identical to Kermit the Frog. In Rayman Arena, he has other skins, one which is him having yellow skin all over him, apart from his head, and is blue flowered, and another which is him wearing a white and black striped jacket and pants, a white shirt and a black tie, in an homage to the title character of Tim Burton's film Beetlejuice. One of his scrapped skins is similar to Superman's outfit.

In Rayman Raving Rabbids there are several costume sets, each with four different parts which can be equipped.

After Rayman defeats a boss, he is awarded with a medal that represents a new costume he will be able to change into. Each costume gives him a new ability, while making him not being able to use any old ones like using his helicopter.

The Nintendo DS version of Rayman Raving Rabbids features multiple costumes which give Rayman certain abilities to help clear obstacles in the levels. The costumes are equipped when standing on a magical stone with the symbol corresponding to the costume. Each costume has a specific color and element.

In the challenges, they are switched around when the player presses a button that is assigned to a certain costume.