Funky Ray shares the same look as Rayman, however, his clothing is similar to that of the Disco costume featured in Rayman Raving Rabbids.

Raw is just like Ray, he's awesome at everything he does. His favourite hobby's chasing bad guys around the Glade of Dreams.
—In-game description, Rayman Legends (early build) on Xbox 360

This groovy hero is an exclusive reward for players who competed in Rayman Legends Challenges App! He’s a fierce competitor who wants to become the greatest champion in the Glade of Dreams!
—In-game description, Rayman Legends on Wii U

As you can guess, this groovy guy spends a lot of time taking care of his amazing haircut. But make no mistake, behind those huge shades lies a real champion always ready for a new challenge!
—In-game description, Rayman Legends on Playstation 4, Xbox One

Originally it appears his name was "Raw some", as can be seen in an early build for Xbox 360.

He loves anything shiny and glittery, and above all, the haircuts from the 70s. His prayers are about to come true: the fashion pages of the Glade of Dreams Daily are annoncing that bell bottoms are coming back in style.
—In-game description, Rayman Adventures

In Rayman Adventures he can be bought in the Groovy Pack or for 1 500 gems. 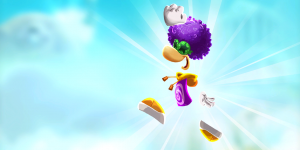