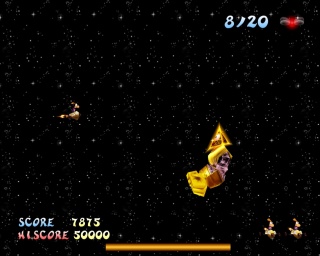 The Ray-Type Challenge is the last of the eight minigames in Rayman Revolution which are unlocked by Ly the Fairy in exchange for Rayman's liberation of Familiar Spirits. As it is the final minigame, the Ray-Type Challenge requires that Rayman breaks all eighty of the game's cages, freeing all eighty of the Familiar Spirits. Like Ly's other minigames, Rayman can access it by meeting up with her at her house, her stele or her cave. Its symbol in the minigame menu is an image of Foutch. The minigame is a parody of the 1987 arcade game R-Type, having the same mechanics and a similar name.

Unlike the other minigames, this minigame also has a secondary objective: achieving a high score. The default high score is 50,000, but it is possible to reach a much higher one. If Rayman manages to break the high score of 50,000, the new high score is saved and replaces the default one on the heads-up display of the minigame. As the minigame progresses, so too does its difficulty. The player will begin to face multitudes of different enemy types, each with their own attack patterns and movements.

Robo-Pirate missiles drop down from the top-right of the screen, once they have dropped a set amount, they will move horizontally towards the left. Shooting a Robo-Pirate missile yields 10 points, while defeating an entire wave of them yields an additional bonus of 300, 500 or 700 points (100 times the number of missiles in the wave).

Piranhas move in a parabolic shape, jumping from the bottom of the screen and returning to it. Shooting a piranha yields 5 points, while defeating an entire wave of them yields an additional bonus of 500 points.

Boss Chenille moves in around a spot in a circular fashion, each Boss Chenille is composed of fifteen body segments. Each segment must be shot repeatedly in order to destroy it; each destroyed body segment yields 50 points, while defeating an entire Boss Chenille yields an additional bonus of 1,500 points.

Bats move in a flock, flying in from the left to the right, then moving back toward the left. Shooting a bat yields 5 points, while defeating an entire wave of them yields an additional bonus of 1,000 points.

After a certain number of obstacles have been overcome, Rayman travels through hyper-space (indicated by the accelerated scrolling of the stars in the background) to confront the minigame's boss, Foutch. Unlike all other enemies in this minigame, Foutch has a health bar of 100 hit points. He has two attacks: hurling a single horizontal blast of flame at Rayman, and spinning rapidly, which creates a stream of horizontal flames. When Foutch's health is diminished to zero by Rayman's energy projectiles, he explodes in a blast of rainbow colours, granting Rayman 10,000 points, and sending him back through hyper-space to the beginning of the minigame. Any lives lost are not restored, but Rayman retains his score and can continue to build on it. If Rayman manages to retain all of his lives, the minigame repeats in an endless cycle, and there is no limit to the score that can be achieved.