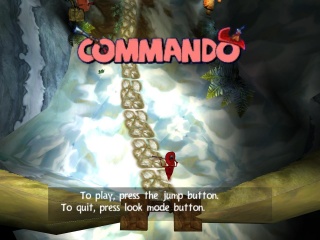 The title screen of Commando.

Razoff doesn't like intruders – he loves them! There's nothing quite like taking potshots at moving targets! But make sure you don't get submerged ...
—In-game description, Rayman 3

Commando is the last of the nine minigames which can be unlocked and played in every version of Rayman 3. The name is a tribute to a very popular arcade game of the same name, with similar gameplay; it is played from an overhead perspective and includes the ability to throw grenades. It is unlocked by earning 300,000 points in the Nintendo GameCube version and 350,000 points in every other version.

This minigame takes place in three areas which are on Count Razoff's property, presumably in or near the Bog of Murk. The main goal is to help Razoff, who is controlled by the player, to survive the three stages of the minigame, and clear up all the Hoodlums in his path. Razoff can attack in two ways: by shooting bullets from his gun (which go straight forward) or by throwing bombs (which are thrown in an arc shape). There are some types of Hoodlums that appear: the Hoodmonger (common), the Hoodboom (uncommon; a boss in the first stage), the Hoodstormer (boss in the second stage) and the Heckler (boss in the third stage). The Hoodmongers have got a resistance of one shot, the Hoodbooms and the Hoodstormer have got resistances of three shots, and the Heckler has got a resistance of nine shots. The red bar represents Razoff's health level. He has got only one shot of resistance. Being hit makes the player restart the level stage where he/she got hit. If Razoff gets hit three times, the player loses the minigame immediately. The yellow bar represents the cleared stages, except in the third stage that represents the Heckler's health. The player wins when the yellow bar is completely empty and Razoff successfully completes the three stages.