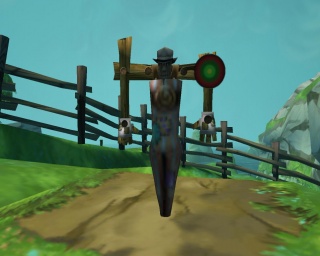 The scarecrow in Rayman Revolution.

A scarecrow is an object that appears in Rayman Revolution.

It has a bowler hat and white gloves with nails through them. Its clothes are made of patchwork, and its right shoulder has an extrusion. On the left one is a massive target.

Its only appearance is at the beginning of the Minisaurus Plain in Rayman Revolution. After Murfy and a baby Globox teach Rayman how to swim, the baby Globox takes Rayman to a clearing. Murfy is flying by the scarecrow. The gate ahead is locked and can only be opened by the scarecrow spinning around. After Murfy tells Rayman how to strafe, Rayman must shoot the target eight times to open the gate. Chronologically, the scarecrow does not appear again, but the player can always go back and have a bit of target practice with it.

It is never revealed who actually built the scarecrow or what it is guarding. There are no crows in the Minisaurus Plain; however there is a black bird that can often be found at the Pier that could be a crow.

In one cutscene of Rayman Raving Rabbids TV Party, there is a scarecrow with the clothing of a Hoodmonger.