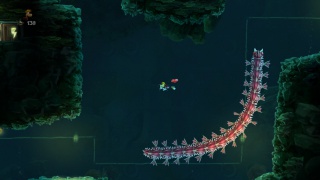 Mecha Mini-Murrays are enemies in Rayman Legends that are encountered in 20,000 Lums Under the Sea. As their suggests, they are robot versions of the Mini-Murrays from Rayman Origins.

Mecha Mini-Murrays are gray and pink robots with mechanical fins and several spikes protruding from them. They can only hurt the player through direct contact.

Mecha Mini-Murrays appear only in The Mysterious Inflatable Island, Mansion of the Deep, and Elevator Ambush. In The Mysterious Inflatable Island and Elevator Ambush, they appear in the areas with the Queen Teensies, where the players must use them to move at the right time to avoid the Dark Sentries. In Mansion of the Deep, they appear in the left portion, swimming around the area where the Queen Teensy is located, and once the player shuts off the power, they once again partially obscure the dark sentries, and the player must pick the right time to swim past.