Allegro Presto (French: Allegro Presto) is the second level in Band Land, the second world of the original Rayman game. It consists of five stages during the first playthrough, and only three during subsequent visits, because in one stage, Rayman meets Mr Sax, and in the last stage he receives his well-known helicopter ability from Betilla the Fairy. This level is the first one in the PC version and its ports where the player can break all 6 cages without backtracking. 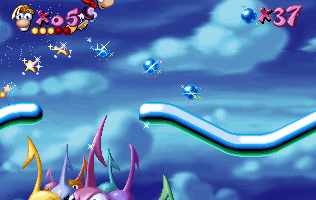 Rayman sliding on the musical staves.

This level requires quick reflexes as Rayman will be sliding on musical staves for most of the time. However, sliding has not been programmed in the Atari Jaguar version, and as a result, Rayman will have to crawl in tight spaces, and there are more enemies – mainly hunters and moths – scattered throughout the level.

This first and last level to contain trumpets. No other enemies apart from wrong notes and mallets appear in this part of Allegro Presto. Again in the Atari Jaguar version, Rayman cannot slide on the bars, neither do the trumpets suck air in, so he would have to defeat any that are in his way. More clouds are added in this version of the level.

Versions based upon the PC version feature a secret area with four extra lives, which requires a perfectly timed jump to reach. In the Game Boy Advance version it is not possible to grab more than one of the lives due to how the maximum speed has been decreased on slippery platforms in that version. In the DSi port it is however much simpler due to an extra cloud being added which takes Rayman to the lives. 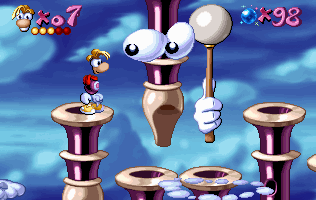 Rayman must avoid the mallets.

This part is over a huge void, and Rayman must be careful not to fall off the slippery sheet music. The end of this part foreshadows Gong Heights as Rayman has to use a monk to reach the end of the level.

At the end of the level, Rayman will meet Mr Sax, who will blow wrong notes at him. Rayman will simply have to punch one of them back, and the giant saxophone will leave the level. Once Mr Sax has been defeated in his Hullaballoo, this phase will not be visited again. This part is also missing in the Atari Jaguar version.

Betilla the Fairy gives Rayman the power to use his hair as a helicopter. In the PC version and its ports, this is the only level Betilla appears in that has a free life, which can be found by falling between a flute to the right of the exit sign.