Gong Heights (French: Gongs Célestes – Celestial Gongs) is the third level in Band Land, the second world of the original Rayman game. It is one of the shortest levels in the game, consisting of only two parts. The second part introduces an invisible force of doom, one of two phases (the other in phase 2 of the Hard Rocks) in the game to feature it as invisible with no other object moving with it.

This level is set over a giant void high up in the sky, and Rayman must use the giant monks, who hold bongos or crystal balls which Rayman can use as platforms. 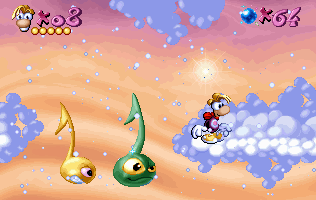 Rayman is pursued by a lethal and unseen force.

There are many clouds in this section, where Rayman must avoid the bolts of electricity shot by the lightning eyes. It is snowing, and Rayman must not stop until he reaches the end of the level, as an invisible force kills him if the edge of the screen catches up with him.