Clouds are platforms which appear mainly in the original Rayman game.

In the original Rayman game, they are found in all worlds, except for the Dream Forest. There are many kinds of clouds. Some of them are static, and others follow various trajectories. Among static clouds, there are bouncy and trampoline clouds, the latter allowing Rayman to jump higher with the correct timing. There are also vanishing clouds, which sport a pair of eyes and disappear once Rayman steps on them, or at regular intervals. During the battle against Mr Stone, moving vanishing clouds appear, but these occur nowhere else.

Clouds return in Rayman Junior. Some of them represent answer choices. In Rayman Designer and its spin-offs, they can be used in all of the worlds. 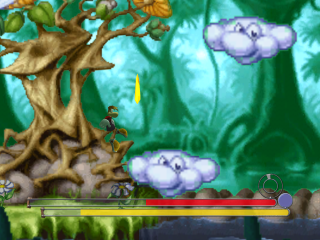 Oversized eyed clouds appear in Rayman 3's 2D Madness minigame, where they are bouncy and do not vanish when stepped on.

Clouds make a reappearance in Rayman 3's 2D Madness minigame, where they are larger, and bounce Rayman into the air rather than vanishing when he steps on them. 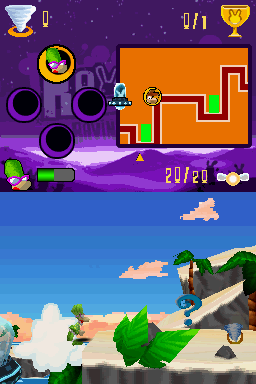 A cloud in a challenge level.

In the Nintendo DS version of Rayman Raving Rabbids, clouds appear in several stages. They start out transparent and not solid, though they can be made solid by using the wind costume. They act as platforms used to get across large gaps. They will, however, only remain solid a set amount of time.