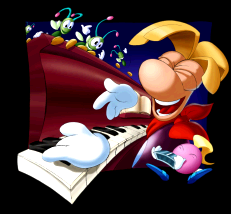 Moths make an appearance in the image used to represent Band Land.

Moths, also known as Grasshoppers or Crickets, are highly resistant insect enemies encountered in the original Rayman game. They are found only in Band Land, the second of the game's six worlds. Their exclusive presence here is somewhat anomalous, as moths have no clear connection to music or musical instruments.

The species of these insects is ambiguous. Like Rayman's species, they are limbless, and are roughly the same size as Rayman. Their bodies are a dark green in colour, while their heads are a light green. Each moth has a pair of green, red-topped antennae growing from its head. Moths wear yellow shoes which appear to have green heels. Unlike most characters in the game, they have no hands whatsoever; instead they possess two pairs of insect wings each.

They freely wander on their platform, turning backwards when they face an obstacle. When Rayman is in sight, they usually start flying and try to kick him. They can dodge Rayman's telescopic fist in the air, but they can also duck to avoid it on the ground, which is an opportunity for them to give Rayman a headbutt. Thus, they are hard to touch and proficient in counterattacks.

Their considerable resistance, their agility, their aggressiveness and their wide panel of attacks places them among the hardest enemies in the game.

In Rayman Designer, there are two types of Moths. There's the standard Moth and then the Cruel moth, which acts more aggressively and attacks Rayman from the air.

In Rayman 3, at one point in the Hoodlum Headquarters, the hostess warns the Hoodlums of a moth invasion in the air conditioning system.