Mr Sax's Hullaballoo (French: Le Charivari de Mr Sax – The Charivari of Mr Sax) is the fourth and final level of Band Land, the second world in the original Rayman game. It consists of three parts during the first playthrough, and only one during subsequent visits, as in the second part, Rayman is chased by Mr Sax, and he finally challenges him in the third part.

This is one of the only levels in the game in which all six cages can be found, the others being the first part of Twilight Gulch and the first part of Mr Skops' Stalactites. It features almost everything that can be found in Band Land; including a new enemy platform, the cymbals; its only appearance in the game. It starts snowing towards the end of the level. 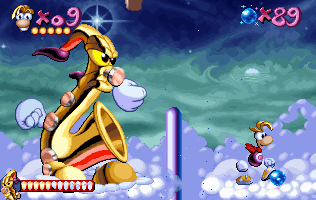 Rayman is pursued by Mr Sax.

Rayman is chased by Mr Sax, and he can punch back his wrong notes at him. This way, he can take take away up to 9 of his 12 life points, making the final battle much easier. 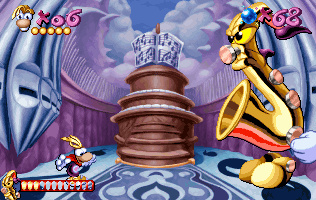 Rayman has to battle Mr Sax. When he is defeated, he begins to dance with Rayman.

Like in the PC version of Mr Skops' Stalactites, it is possible here to break all 6 cages in the first phase and leave through the start-of-level exit sign without having to face the boss. This is possible in all versions of the game. Even if Mr Sax was not defeated, Mr Dark's Dare will still unlock once all cages have been broken.