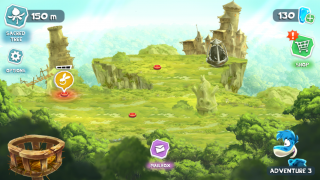 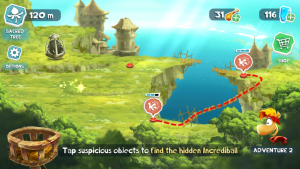 A creature hiding on the map, as seen by the sparkles at the top. It can however also be a Surprise Egg.

The Adventure Map is the map screen from Rayman Adventures where the levels of the current adventure are shown. Each adventure map contains 3 or 4 levels with one of them always being an optional, but slightly more challenging, level. At the end the adventures egg is revealed and the player can continue on to the World map and select their next location.

There are four different types of levels which can appear on the adventure map. The first ones are the Lum levels in which the goal is the collect as many Lums as possible. The Lums are usually found normally in the levels and usually there are no enemies present. These levels encourage the player to use inhalers, as they can easily attract Lums from a small distance.

The second type are the exploration levels in which the goal is to earn as many Lums as possible by freeing trapped Teensies. Although enemies do appear by holding some Teensies prisoners, they usually can't hurt the player. Lums are not usually found separately in these levels, although skull coins do appear. These levels encourage the player to use seekers, as they will each find the nearest Teensy or skull coin three times in a level.

The third type are the brawler levels in which the goal is to earn as many Lums as possible by defeating enemies. Thee levels usually only contain enemies, and sometimes skull coins as well. Several of these levels are styled like small arenas, with only one room in the level where enemies continuously enter. These levels encourage the player to use protectors, as they will give the player a temporary shield upon taking damage.

The fourth type are the time levels in which the goal is to finish the level as quickly as possible. Similarly to the invasions from Rayman Legends, there are three Teensies attached to rockets at the end of the level. Each rocket will go off within a certain time limit with usually 10 seconds differentiating between each one. Using an Incrediball on these stages will result in them decreasing the final time by 0.5 seconds if not been used and 0.25 if been used, unlike other levels where they will add either 10 or 20 Lums depending on if they have been used or not.

Each adventure also contains an optional skull level. These levels are usually more challenging, but will earn the player twice the normal awards upon completing it.