When Toads Fly is the seventh level of Toad Story, the second world in Rayman Legends. In this level, the players will be gliding along air currents while using the Blue Punch from Gandalf.

This level is one big area. Rayman and the team come across Gandalf, who gives out the Blue Punch power-up. This is useful for defeating enemies from a distance. The heroes will come across Red Toads that spit out fireballs and ones that shoot fireballs. The first secret area can be found by going down to a Lum chain. As the heroes continue to glide along with the wind, they will encounter Darkroots and more Red Toads. The second secret area can be found by falling down in between a wall and a colliding platform before going upwards. More grassy platforms begin to collide with one another; the heroes can be squashed by that if not careful. The first Skull Coin is in between two smaller colliding platforms. After defeating a plentiful amount of Red Toads, the exit is found. 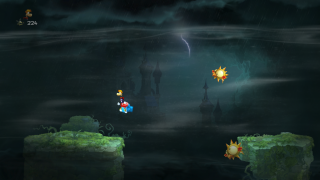 In this area, the wind is very strong, and in effect wooden barricades and spiky birds are being flown across. The team must avoid the spiky birds until the Teensie comes landing onto the platform. 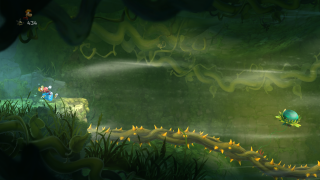 This level is invaded by enemies from 20,000 Lums Under the Sea, including Spy Toads, flying missiles and electric balls falling from the sky.

It is unlocked once the original level completed, and once the player(s) get far enough in the world 20,000 Lums Under the Sea.

At the beginning, the player(s) is given Blue Punches by Gandalf.