The Hall of Doors

From RayWiki, the Rayman wiki
(Redirected from Hall of Doors)
Jump to navigation Jump to search 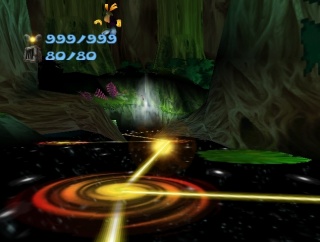 Rayman running through the Hall of Doors (Nintendo 64 version).

The Hall of Doors is a location found in most versions of Rayman 2. It acts as the game's hub level, an overworld from which the player can access the rest of the game's levels at will. As the player progresses through the game, more and more levels become accessible from the Hall. The Hall first becomes accessible to players after they complete the first level, the Woods of Light, at the end of which the Grand Minimus shows Rayman the way to the Hall.

An old Rayman 2 website referred to the Hall of Doors as a 'magic well'.[1] This may mean that the developers intended it to be a well at some point, but it could simply be a mistake.

In the original version 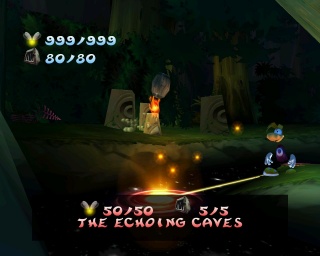 The Hall of Doors was constructed long ago by the Teensies, who lead Rayman to it near the beginning of Rayman 2. The place where all paths eventually meet, the Hall of Doors is a dark metaphysical wood, with a glass-like river stretching throughout it. The river contains Spiral Doors leading to the levels of the game. Stars are seen both in the sky and in the distance below the river. In the Hall of Doors, the player does not have direct control of Rayman; a single press of one of the four directional buttons will cause Rayman to run to the Spiral Door in that direction, following the Lum. This system of level-selection is the same as that used in the world map in the original Rayman game. When Rayman walks to a Spiral Door, a hologram of something from that Door's level appears. For example, bringing Rayman to the Spiral Door which leads to the Tomb of the Ancients will cause a hologram of a Zombie Chicken to appear.

In the PlayStation version of Rayman 2, the Hall of Doors looks quite different from how it appeared in the original version. It is no longer in a forest, and there are many minor alterations to the scenery and the level-entrance arrangements. A certain number of Yellow Lums are required to gain access through each of the four main doors that are present in this version of the Hall of Doors, each of which bears a large image of the Mask which is found beyond it. The first door requires Rayman to have 50, the second 150, the third 400 and the fourth 600. This version of the game essentially combines the Hall with the Chamber of the Teensies.

In the Dreamcast version of Rayman 2, the Hall of Doors was replaced by the Isle of Doors, a hub with a similar basic function but a completely different aesthetic. The Isle resembles an enormous three-dimensional map of the Glade of Dreams, the world in which the Rayman games are set.

In Rayman Revolution, the PlayStation 2 remake of Rayman 2, the Hall of Doors is replaced by a new hub known as the Front. Comprised of the Minisaurus Plain, Globox's House and Rainbow Creek, the Front is much larger than the Hall of Doors, and Rayman can traverse it freely, like a normal level.