Rayman 2 for the Sony PlayStation is a remake of the game developed by Ubisoft Shanghai. Unlike other versions, which are ports from specific console releases, this version was remade to work with the more limited resources of the PlayStation console. Most notably this version omits several levels, combines levels and features fewer soundtracks than other versions. The graphical quality is lower as well. The soundtrack quality was however kept intact, not utilizing the lower quality MIDI one from the Nintendo 64 version.

Notable differences from the PC/console versions 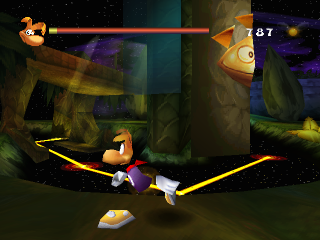 The Hall of Doors.

Many of the levels are heavily altered from other versions. The most notable ones are Whale Bay (which has been merged with the Sanctuary of Water and Ice), the Sanctuary of Stone and Fire (featuring all new sections, while also removing some) and the Crow's Nest. After finishing the Crow's Nest there is a playable level from the cancelled 2D prototype, only unlocked if 90% of the Yellow Lums have been collected.

In 2018 it was discovered that the PlayStation version contains a reference to a level by the name the Walk of Bravery, which was meant to appear between the Echoing Caves and the Precipice. Not much is known about this level, although the name was translated into all available languages. Judging by the name it was most likely meant to be similar in style to the Walk of Life and the Walk of Power. 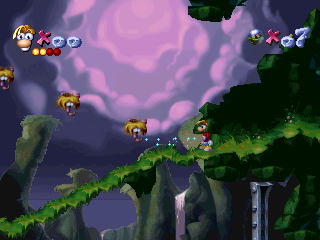 Rayman captures a scared platform with his telescopic fist in the playable prototype level.

There is a secret level from the original 2D version of Rayman 2 that can be played if the player collects 720 of the 800 Yellow Lums and completes the final boss fight in the Crow's Nest. The gameplay is similar to that of the original Rayman game. Rayman must travel from the foreground jungle landscape to the background landscape, battling early versions of the Robo-Pirates and a Robot Dinosaur. Elements from the original Rayman game appear in the level, like the Big Power, life, nenuphar and the end-of-level exit sign.