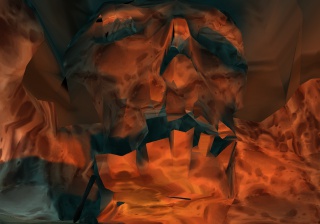 Rayman hovers over the lava that surrounds the skull formation.

Skull Cave is an underground cave found underneath Globox's House in Rayman Revolution. It can be accessed by using an elevator that is found just outside the Globox family home, and once there, Rayman will discover the paths to the Sanctuary of Stone and Fire and the Tomb of the Ancients. Its name comes from the fact that there is a giant rock formation depicting a skull, the holes of which can be accessed through.

Rayman can first visit the Skull Cave at any time after his arrival at Globox's House by taking a lift shaft near the aforementioned house, which leads directly into the cave. Upon his first visit, Rayman will find very little of interest, a rock shaped like a skull (that the entire cave is named after) which is inaccessible, and the entrance to the Sanctuary of Stone and Fire which is unreachable and also blocked by a massive tentacle. The only thing remotely interesting is a locked door, guarded by two sleeping pirates who awaken if an alarm is triggered. This is the entrance to Whale Bay. Back at Globox's House, Rayman can meet a baby Globox, who will offer to help. If Rayman can get the baby Globox to the security door and place him in a small crack to its left, either defeating the pirates or avoiding detection by them, he will open the door, allowing Rayman to access Whale Bay.

Second visit – Accessing the Sanctuary of Stone and Fire

After completing Whale Bay and the Canopy, Rayman will have his next incentive to return to the Skull Cave. Arriving at the blocked and unreachable entrance to the Sanctuary of Stone and Fire, Carmen the Whale will appear, now freed due to Rayman's exploits in Whale Bay, and get rid of the tentacle blocking the entrance. This still leaves the entrance inaccessible, but that can be solved by returning to Globox's House and asking Globox himself for aid. Globox will be rested up from his capture and escape from the Canopy and follow Rayman back to the cave, where he will use his Rain Dance on a plant nearby, allowing it to glow and grant Rayman a way of finally entering the sanctuary to retrieve the second mask.

Rayman will return again to Skull Cave very soon after. Once he has the second mask from the Sanctuary of Stone and Fire, he will learn that Clark is waiting to help him in Skull Cave. Upon meeting Clark near the entrance to Whale Bay, the giant tells Rayman that he will open up a path to the third mask, which he does by smashing down a wooden wall and revealing a previously unknown tunnel. In the tunnel, Rayman and Clark will encounter a few pirates, which Clark will chase after. Unfortunately, the Spyglass Pirate uses this opportunity to catch Rayman alone and ambush him, leaving the hero to fight a huge swarm of pirates on his own. Once Rayman overcomes this rough challenge, he can enter Rainbow Creek.

Fourth visit – Accessing the Tomb of the Ancients

Rayman would then not return to Skull Cave until much later on in the game, once he has the third mask from beneath the Lava Sanctuary. Now that he has the ability to hover above lava, he can easily reach the skull shaped rock, beyond which lies his next destination, the Tomb of the Ancients.

The cave can be returned to at any time besides these four encounters, allowing Rayman to gather left behind Lums.