From RayWiki, the Rayman wiki
(Redirected from The Guardian of the Cave of Bad Dreams)
Jump to navigation Jump to search

A terrifying monster whose job it is to guard the subterranean grotto where the creatures, stemming from the nightmares of Polokus, are locked away. No one has dared to venture within the Cave of Bad Dreams, even though it's rumoured to contain an even more precious treasure...
—Manual, Rayman 2

Jano is a fierce but wise creature, with the ability to read an individual's mind, breathe fire, conjure floating skulls, and change his size (becoming huge during his battle with Rayman). As a guardian, he will ward off anyone that doesn't know the name of the Cave of Bad Dreams. Although he is an ally of Rayman in general, he challenges Rayman to find the treasure that is hidden deep in the Cave in Rayman 2, chases and battles him towards the level's end, and offers the treasure to him upon his defeat (even though Jano attempts to kill Rayman a number of times throughout the level).

He can tell whether or not an individual is greedy, so he rewards Rayman with the Elixir of Life for refusing to take the tempting treasure. In all versions of Rayman 2 (excluding the PlayStation version), the player gets to choose whether (s)he wants the treasure or not, and in choosing it, Rayman is cast to a deserted island surrounded by the gold, noticeably obese, resulting in 'the end of the game'. 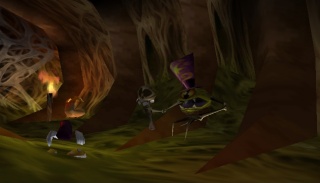 Jano meets Rayman in the Marshes of Awakening.

Jano makes his first in-game appearance in the Marshes of Awakening, one of the earlier levels of Rayman 2. Encountering him at this point is optional: he can be found in a cavern located at the end of a hidden side-path in the swamp. If Rayman approaches him, Jano tells him that he cannot pass unless he knows the name of this place. Rayman must retrace his steps and continue the level as normal.

Later, Rayman meets up with his friend, Clark the Giant, in the Menhir Hills. Clark has become ill as a result of eating a rusty Robo-Pirate in the heat of battle. He tells Rayman that the only way to heal him is to recover the Elixir of Life from the Cave of Bad Dreams, where it is guarded by a fierce monster. This is also where the creatures born from the nightmares of Polokus are imprisoned. Rayman returns to the Marshes of Awakening, and Jano reads his mind, seeing that he now knows the name of Jano's domain. Jano tells Rayman that he has hidden a precious treasure within the Cave of Bad Dreams, and that Rayman can have it if he finds it. Jano warns Rayman that he will chase him, but says that he will give him a head start.

Jano then teleports Rayman to his lair, where he encounters many Mini Jano and other obstacles. Eventually Jano catches up with Rayman and chases him down a slimy slope in an attempt to eat him. Next, the two battle; Rayman must avoid the fireballs Jano spits, while traversing the floating skulls he conjures. After turning the tables on Jano and chasing him away, Rayman finds himself in a chamber filled with mountains of gold and jewels. Jano says that Rayman has defeated him, and asks him to choose between the treasure and the Elixir of Life. If the player selects the treasure, Jano punishes Rayman by making him obese and teleporting him to a desert island with only the treasure to keep him company, and the game ends. If the player chooses the Elixir, Rayman finds himself back in the Marshes of Awakening, where Jano is congratulating him on having made the right choice. Jano hands over the Elixir (which turns out to be contained in the skull mounted atop his staff), and sends Rayman on his way. Rayman thanks him and leaves. In spite of Jano's new benevolence, he still attacks Rayman should he return to the Cave of Bad Dreams.

A glitch involves Jano has been known to occur in the PC, Nintendo 64 and Dreamcast versions of Rayman 2. If the player returns to the Marshes of Awakening after beating the Cave of Bad Dreams, they can see a miniscule Jano floating over the swamp water, just on the left side of the log leading to the cave, where Rayman appears after choosing this level. 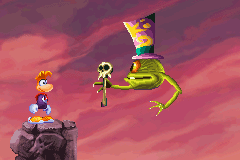