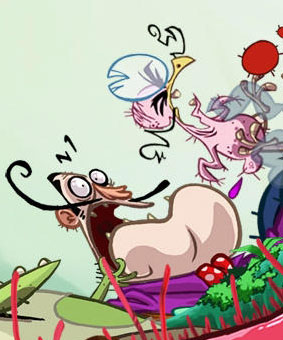 A Hunter and his harmed Hunter Bird

Hunter Birds are scrapped bird enemies from Rayman Origins. The strong resemblance that they have with the Hunters suggests that they are possibly trained by them to harm Rayman and his friends. Along with many other scrapped characters, the Hunter Birds formed part of publicitary media such as the Daily Bubble and the launch site of the game. A Hunter Bird also made an appearance in The Art of Rayman Origins. The most common artworks depicts a small featherless bird, with a suffering expression, a broken monocle and a messy moustache; this could be the form that the Hunter Birds take when they are defeated.

A Hunter Bird can be seen in the "Secrets" issue of The Daily Bubble, in a clear sketch of the level 'Hi-Ho Moskito!'; the Hunter Birds were supposed to appear right before the appearance of the Boss Bird, however, they didn't make any appearance. The map also suggests that they were supposed to make their first appearance at the Desert of Dijiridoos instead of the Jibberish Jungle. The icon of the map also displays a clearer artwork of the Hunter Birds' real form: They have purple feathers, a thin body, small wings, a pointy beak and an enormous, curly moustache.