Eraser Plains (French: La Crique aux Crayons – The Creek of Pencils) is the first level of Picture City, the fourth world of the original Rayman game. It consists of four parts the first time it is played, and only three during subsequent visits, as Rayman battles Space Mama in the final part.

Rayman must jump across giant pencils that float up and down above an ocean of ink. As he gets to the last part of the phase, sharp drawing pins wait above, so Rayman must be quick across the pencils. This phase introduces the yin-yangs, which are used similarly to the plums. Just above the exit sign is a sparkling gendoor that spawns an instantly-collected Super Helicopter potion; it is however optional as everything in the level can be collected without it. 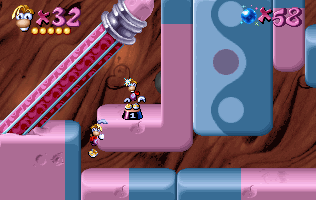 In this phase, Rayman has to shrink a couple of times to access certain areas. He must use his running ability to pass through the waves of giant pencils without harm. The space pirates also appear for the first time. 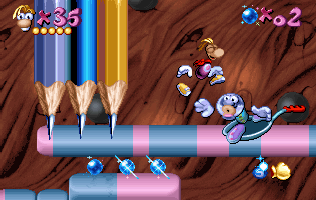 Space pirates are among the rare enemies in Picture City

This phase is quite similar to the previous phase. Note: this exact map has been omitted in the Atari Jaguar version. 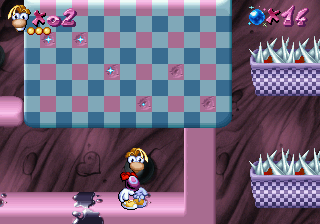 This area features a puzzle for Rayman to observe

In the Atari Jaguar version, this map is completely different. It starts with a series of flying rings, the first few being blocked with spiky yin-yangs, while in the middle of those is a box of pins topped with a cage to break. Near the end of this level, there is a chequered eraser with a series of sparkles in certain squares - this indicates the safest way to cross several boxes of pins, which in turn are represented by pink squares. When Rayman walks on the right ones, he will be able to cross them unhurt, but if he gets them wrong, he will die instantly. 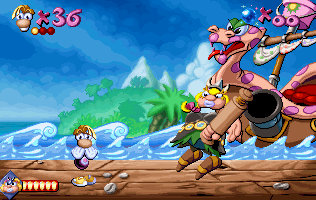 The first battle against Space Mama

Rayman must fight Space Mama for the first time, after defeating two of her pirates.