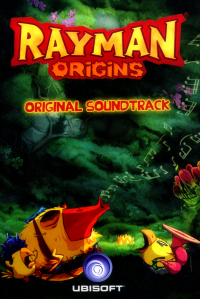 Rayman Origins: Original Soundtrack is a 2011 album by Christophe Héral and Billy Martin, consisting of the music they composed for the 2D sidescrolling platform game, Rayman Origins.

Héral had previously collaborated with Michel Ancel and Ubisoft Montpellier by writing the score for Beyond Good and Evil. He was originally intended to create the entire Rayman Origins score, but scheduling conflicts made this impossible, so Martin was hired to complete it. The soundtrack consists of 36 tracks; 24 were composed by Héral, and the remaining 12 were composed by Martin.[1][2] The album came packaged with the Collector's Edition of Rayman Origins, which is the first instalment in the Rayman series to receive an official soundtrack release. The game's music was performed by the Star Pop Orchestra and recorded at the Davout Studios in Paris; this contrasts with the previous games, which featured mainly synthesised music. The soundtrack was first released on 15 November, 2011. Its full duration is one hour, five minutes and 25 seconds. The album includes several compositions which were not used in the game, including one instrumental rock theme which seems to have been written for a climactic boss battle.