Swinging Caves is the sixth level of the Jibberish Jungle, the first world in Rayman Origins. It is part of the demo that was released on the PlayStation Network and Xbox Live on November 9, 2011. This level centers around being in forest caves for most of the duration, and timing jumps when avoiding tentacle claw infested water. The PlayStation Vita version of Rayman Origins features a Ghost Mode of this level. This is the third playable level from this world in the Back to Origins mode in Rayman Legends.

The heroes land, around them are mysterious pillars with Lums on top. There are many nenuphars ahead, along with two Lividstones. There are two Skull Coins near the end of the area; for the first one, the heroes will have to drop down with caution, as there is an abyss below, and the nenuphar that the heroes need to land on moves horizontally. The second coin can be found to the far left of where the the first coin was, hiding behind some foreground vines; coming into contact with the vines will make them disappear, making the coin visible. The exit is not far from here, the heroes will need to make use of the remaining nenuphars and perform walljumps in order to get there. 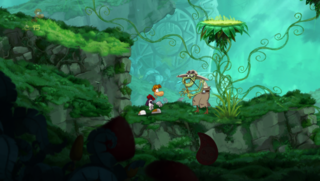 The first relic can be found in the foreground.

The first relic can be found in the foreground directly below a Lividstone.

The heroes must use the Swingman to pass the water. The first secret area can be found to the top left of a platform where three Lividstones are located. Afterwards, the heroes can proceed to a large body of tentacle claw-infested water. In order proceed, the heroes will need to jump on the moving nenuphars. Taking the higher path will result in having to activate a flower bulb; using it will lead to the third Skull Coin located underneath a platform, which will attempt to crush the heroes. The exit can be found nearby, but the heroes will need to dodge a tentacle claw in another body of water, then climb up and defeat two Lividstones along the way. 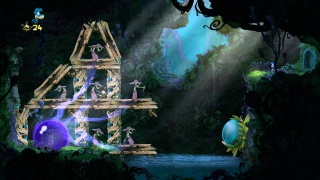 There are seven Lividstones in this area, they all stand between wooden barriers. The heroes need to crush attack onto a large flower bulb in order to reach the top and destroy the Lividstones. The Electoon cage is at the bottom left of the area.

The second relic can be found in the background just over a pond. It is camouflaged, so it can be hard to spot. 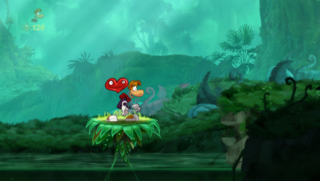 The second relic can be found just to the right of Rayman. 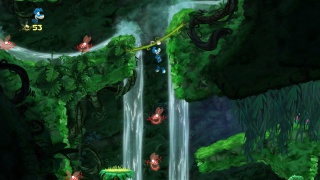 The third area of the level.

As the heroes enter this very short area, they will encounter some water currents, and eventually descend to a vine. Once the heroes grab onto the vine and drop down to a nenuphar, they will need to be careful, as there is an abyss below. The fourth Skull Coin is in this area at the bottom left of a wall, the heroes will need to walljump as soon as they collect it. The second secret area is located to the right of the nenuphar, and like the first secret, there are foreground vines hiding the door. Once completed, the heroes can use the Swingman to advance to the exit, guarded by a Lividstone. 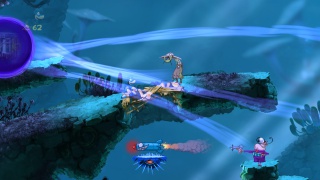 In this relatively dark place, the heroes will have to destroy three Lividstones, and a hunter. Once all are defeated, the cage at the far left of the area can be broken. 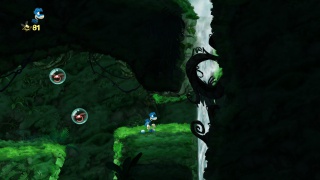 In this final area before reaching the cage, the heroes will need to ascend in order to reach the exit. First, the Swingman will assist them in reaching a flower bulb, and then they will be lead to another Swingman. After using it to ascend to a vine, the heroes continue to pass a couple of platforms; the second platform has a geyser at the end, which will push the heroes to the exit.

The heroes have to battle several Lividstones scattered throughout the area. Once they are defeated, the cage can be broken , thus ending the level. The Magician will then wait as the total amount of Lums that were collected throughout the level are counted, as the heroes pose on a photoboard.

In the Back to Origins version, the only notable differences are some of the Rayman Legends elements that replace some from the game.