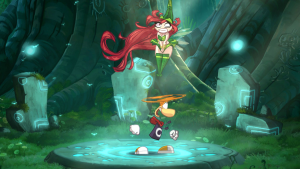 Rayman using his propeller to blow up Betilla the Fairy's skirt.

The Propeller is a scrapped ability from Rayman Origins. With this ability, Rayman could keep static in the ground while spinning his hair (much like the helicopter ability) to produce strong airstreams with several different functions. As its name indicates, the propeller was basically intended to be used to propel elements that float in water while the heroes ride them, such as boats or big slices of watermelon. Players could also remove the clothes of the Lividstones, leaving them almost naked. During the first trailer, Rayman is seen mischievously blowing Betilla's skirt a few seconds after his own creation, suggesting that he would be able to use this ability from the beginning of the game.

In multiplayer, the characters could have used this ability cooperatively to keep gliding in the air and reach higher places; while one player stays in the ground performing the propeller, the other one uses the helicopter to approach the airstreams and fly, much like the airstreams from the Desert of Dijiridoos.

While Rayman used his hair to perform this attack in the trailers, Globox is shown shaking his hands to produce the air. Later, during a demo, Globox's animation was changed; he stands in one hand, and his body spins with his shoulder as the axis, as his open mouth produces the airstream.