Rayman poisoning your life? I've got the antidote.
—the General to Admiral Razorbeard, Rayman 2

The General, also known as the Grolgoth Salesman, is an unnamed minor character who appears in Rayman 2. He also makes an appearance in Tonic Trouble, another Ubisoft platformer where Rayman creator Michel Ancel was involved. In Rayman 2, the General is seen only once during one brief cutscene near the end of the game.

The General has purple skin, a uniform with several badges pinned to it, and wears a hat which hides his eyes. He is limbless, and appears to be of the same species as Rayman and the other characters from the original Rayman game. In Tonic Trouble he does however appear as a member of an alien army, making it be believes that he is in fact a species from Tonic Trouble, from which he shares many similarities, such as his limblessness and purple skin.

In Rayman 2, the General arrives at the Buccaneer in a small flying vehicle, where he is referred to as ‘a very special guest’. He attempts to sell a machine called the Grolgoth to Admiral Razorbeard so that he can destroy Rayman, telling Razorbeard to ‘Decide quickly – I have other clients waiting’. Razorbeard gives the General a massive pirate's chest full of gold and dismisses him. The Grolgoth he sold goes on to become the final boss of the game. 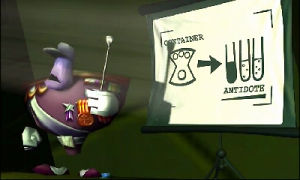 The General in the introductory sequence of Tonic Trouble (PC version only).

In the PC version of Tonic Trouble, the General appears in the intro cutscene. He instructs the protagonist Ed regarding his objectives in the game before a court at which he is being reprimanded for spilling the titular tonic. 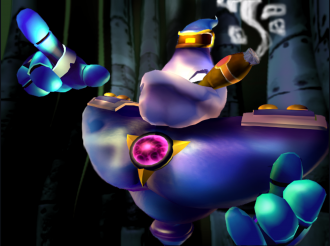 The Chief, as seen in a promotional video for the then-planned 2D version of Rayman 2.

An image of a character with a very similar appearance to the General, named the Chief, was shown in a promotional video for the now-cancelled 2D version of Rayman 2, along with other characters such as the Guard and Betilla the Fairy. Another image of him was printed in a magazine containing a brief article on the then-upcoming game, showing him in a prominent position. Another piece of artwork shows Rayman sneaking up on him as he stands atop a wrecking ball like Count Razoff, while smoking his cigar and apparently shouting orders to his servants.