Tonic Trouble is a video game developed by Ubi Soft Montréal, initially to test the 3D engine used by Rayman 2.[1] It is notable for featuring limbless characters akin to the earlier Rayman games although it is actually set on Earth; in fact, one of these characters makes a cameo appearance at a very late point in Rayman 2, and Rayman makes a cameo in Tonic Trouble's end credits. It was released for the Nintendo 64, PC and Game Boy Color (only in Europe) in 1999.

The game follows the story of Ed, a small and clumsy member of a purple limbless alien species, who works as a janitor during a voyage through space, on a craft called The Albatross. Ed is voiced by David Gasman, who also voices Rayman in Rayman 2, Rayman M and Rayman 3. During one shift, Ed comes across a strange can and drinks its contents. He doesn't like the taste, and spits the fluid out, causing any object it came to contact with to come to life, forcing him to throw it down a chute which sends it falling to Earth. The fluid's effects on the Earth's environment cause chaos, and the can falls into the hands of a Viking called Grogh, who becomes more powerful upon drinking from it.

Ed faces a trial in court, and as punishment for his carelessness, he is sent to Earth to clean up the mess. During his journey there, his own spaceship malfunctions and ends up crashing into a snowy mountainous area on Earth, which is now roaming with mutant killer vegetables and balloon sheep. Eventually he meets a doctor and his daughter, Suzy, who offer to help him by giving him weapons and powers in exchange for small things such as springs and propellers used by the Doc to build a machine. 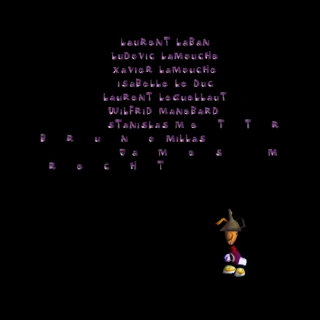 A character disguised as Rayman appears in the credits of Tonic Trouble.

The game sticks very closely to the formula found in the first Rayman game. Much like in the original Rayman game, Ed starts off defenseless and acquires new weapons and powerups throughout the game. Also, each stage includes 6 objects that Ed must collect in order to properly complete it. The main difference between the two games is that Tonic Trouble is in 3D, and some stages in the game focus more on puzzle solving than platforming. In addition to the 6 objects in each stage, Ed must also collect 120 antidotes hidden throughout the levels and Southern Plains hub map in order to access the Magic Mushrooms Lair late in the game (akin to needing all of the Electoons to enter Candy Château in the original Rayman game).

The music in Tonic Trouble was composed by Éric Chevalier who also composed the soundtrack for Rayman 2. The soundtrack is very eclectic and experimental in nature. In one portion of the game bagpipes, a rhythm guitar, a beat boxer and a synthesizer can be heard at the same time. The music was intended to be interactive and would change depending on the mood Ed was feeling in each room, but in the final version of the PC game each track is a long suite of sorts.

Ed also has his own short jingle "theme" that can be heard in some of the tracks that sounds almost like the inverse of Rayman's theme from Rayman 2.

Early in 1999, a beta version of Tonic Trouble called "Tonic Trouble Special Edition" was released with some computers. The game is very different to its final counterparts on the PC and Nintendo 64, featuring different level designs and, in some cases, music. Ed controls very differently and feels heavier due to a less-precise jump and tank-like controls. Unlike in the final PC version, there are no subtitles, and some characters have different voice actors. The beta version also has different names for some of the stages, and features a world map that can be brought up to check the player's progress on the collectibles in each stage.

This henchman is the first one that the player will find in the Canyon. He will repeatedly spray a shower of bullets in Ed's direction, and occasionally take a short break from firing. Takes three hits from the stick or one hit from the blowdart pipe to be defeated.

This henchman can be found in the Canyon guarding a full health powerup. While flying with his propeller hat he does not try to harm Ed, but when he lands he will fire a long stream of fire in Ed's general direction. Takes three hits from the stick or one hit from the blowdart pipe to be defeated.

The UFO-like mushroom caps hover over long stretches of lava in the Canyon. If they spot Ed they will fly to wherever he was standing when spotted and explode. If Ed moves out of the way while a mushroom cap is flying towards him, he can avoid the cap's attack entirely. Mushroom Caps cannot be harmed.

The Grape appears during the end credits of the beta version of Tonic Trouble. It can be seen rearranging itself into various shapes such as a tank or a cube. One of the Grape's grapes has a heart on it. It is currently unknown if this enemy actually shows up in a stage of the beta version.