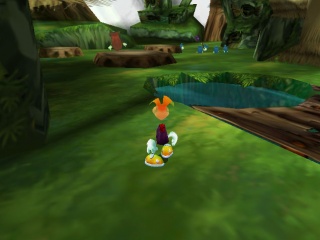 Globox Village is a bonus area that is exclusive to the Dreamcast version of Rayman 2. As the name suggests, it is the home of the Globox family, and also the home of several minigames that can be unlocked by collecting the six Glob Crystals that are scattered at various points of the game.

The village is located beyond a hidden passage near the very end of the first level, the Woods of Light. Rayman can enter it by grabbing onto the Purple Lum that floats in the air in the area where he climbs up between the two walls before meeting the Grand Minimus.

When Rayman firsts visits the village, he will meet a few baby Globoxes that will soon be playable in the minigame, Globox Disk, and as he collects more of the Glob Crystals, more playable babies will appear. The babies and the portals to the minigames are watched over by an unnamed red adult member of Globox's species.

A new minigame is unlocked each time Rayman collects a pair of Glob Crystals, these games are: 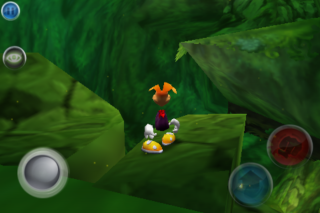 The ledge still exists in the iOS version.

Although both the Apple iOS and Nintendo 3DS versions of Rayman 2 were based closely on the Dreamcast version, the Globox Village (along with the Glob Crystals and the three associated minigames) was removed from both during the porting process. This content remains exclusive to the Dreamcast version. The minigames themselves, however, are also available in Rayman Revolution: Pyralums and Weblums as Ly's Challenges, and Globox Disc from the Magic Wells.