It is an honour to serve a hero such as yourself.
—Umber, Rayman 2 (PlayStation version)

Umber, also known as the Guardian of the Sanctuary of Stone and Fire, is a character who appears in Rayman 2. His task is to protect the second mask of Polokus, but unlike the other Guardians, he does not attack Rayman.

Umber is a tall, statue-like creature whose stone body is composed mainly of cube-like geometric blocks. He is the Guardian of the Sanctuary of Stone and Fire, where the second of the Four Masks of Polokus is hidden. When the masks are reunited, Polokus will awaken, and destroy the evil Robo-Pirate army; this is the main objective of Rayman 2 and its remakes. Umber is almost robotic in his movements; since his body is constructed of rigid stone sections, he cannot flex or turn in any way; he can only move certain parts of his body up and down, such as his arms, legs and mouth, allowing him to walk and speak. He is distinctly different from the other three Guardians of the masks – Axel, Foutch and Grolem 13 (who appears only in the PlayStation 2 version, Rayman Revolution). The other Guardians are all glowing, legless, levitating, pyramid-headed enemies, whereas Umber is a benevolent statue. This discrepancy is never explained. In the PlayStation version of the game, the Guardians (including Umber) are given some dialogue, and their personality and motivations are explored in greater depth.

Unlike the other Guardians of the Four Masks of Polokus, Umber does not attack Rayman. He appears to be no more than a stone statue, until he is activated when Rayman throws the two Magic Spheres onto their respective pyramids. Umber then begins to move mechanically, walking from his culvert into the middle of his chamber. When Rayman climbs onto the top of Umber's stone head, Umber begins to walk into the pit of magma which lies before him, slowly sinking as he does so. He eventually comes completely submerged; Rayman must debark onto the opposite side of the pit to survive. This is where he finds the second of the four masks. Should the player choose to return to the Sanctuary of Stone and Fire, Umber can still be found there in his previous position, waiting to ferry Rayman once more across the lava. It appears that Umber survives being submerged in lava.

In Rayman Revolution, a stone carving of Umber's face appears in the Fairy's Glade, the game's second level. It can be found at the beginning of the level's final phase by turning around and examining the wall. The meaning of this carving, if any, is unknown.

Like the other Guardians, Umber is omitted from Rayman 2 Forever, the Game Boy Color version of Rayman 2.

In the PlayStation version, Umber speaks, warning Rayman about the Ninja Henchmen.

It is made clear that Umber is a benevolent being. It is explained that Ly the Fairy ‘contacted his spirit’, and that, unlike the misguided Axel and the insane Foutch, Umber responded positively to her pleas, and decided to aid Rayman in his quest to gather the four masks, reawaken Polokus and defeat the Robo-Pirates. In this version, Umber is known only as ‘a stone Colossus’; like the other Guardians, he remains unnamed, and is given a scene of dialogue with Rayman. Once he ferries Rayman across the lava, Umber tells him that it is an honour to serve him, probably referring to the events of the original game, in which Rayman saved the world from the evil Mr Dark. Umber warns Rayman that Ninja Henchmen are on his trail, and advises Rayman to use their heavy hooks against them.

Notably, Umber does not sink in this version. 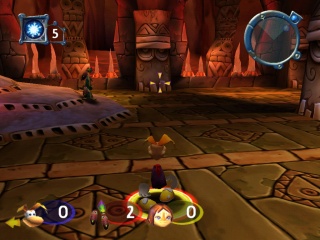 Rayman M and its North American localisation, Rayman Arena, include an arena level entitled Forgotten Dungeon. This arena's scenery indicates that it is located somewhere in the region of the Sanctuary of Stone and Fire. Forgotten Dungeon contains several stone columns which, like the wall in the Fairy's Glade in Rayman Revolution, bear engravings of Umber's face.