Baby Football is a two-player minigame exclusive to Rayman Revolution. Along with Dogfight and Globox Disc, it is unlocked by going to the Magic Well after gathering all 1000 Yellow Lums, for 50 Yellow Lums. In this minigame, player 1 controls a team of female baby Globoxes and player 2 controls a team of male ones. The two teams play a game of football, which is refereed by Hardrox. Advertisements for products such as ‘Globox Cola’ and ‘Fresh Smile Toothpaste’ can be seen in the background and even adverts for the game and the makers of the game.

If the player inputs a code (tapping L2, R2, L2, R2, L2, R2, all while holding L1 and R1), names appear over the heads of each of the baby Globoxes. The names vary each time the player inputs the code; those which appear over the male blue babies include Arno, Reno, Greg, David, Poc and Druid; and the names which appear over the heads of the pink female babies include Coach, Masrsu, Mike, Lolo and Iki. Hardrox, who is the referee of the baby Globoxes' football match, has the name ‘Steve’ appear over his head. All of these names are either first names or nicknames of developers who worked on the game, and all can be seen during the game's credits. 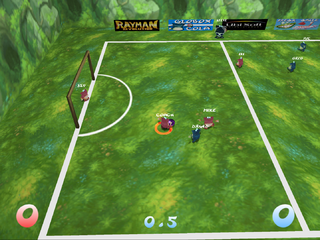