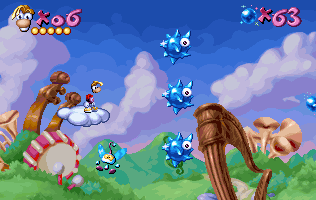 Rayman was shrunk down by this Flying Blue Elf.

These little creatures give Rayman the ability to shrink down in size, so he can pass easily through some of the game’s narrow passages. Walk up to one to become small, and walk back up to him or to another one to become normal-sized again.
—Manual, Rayman

Flying Blue Elves, also known as Reducers, are small creatures found in the original Rayman game and Rayman Designer. In the original game, they only appear in Band Land and Picture City, while in Rayman Designer they can be used in all worlds. They are also notably absent in the Atari Jaguar version of the game, where puzzles involving them have been tweaked to compensate.


The Flying Blue Elves have the ability to shrink Rayman down to a minuscule size by touching him. This allows him to enter small passages that were inaccessible at his normal size. Touching them again causes Rayman to return to his original size.

Rayman's ability to resize himself is revisited in Rayman Revolution by eating a Yellow mushroom in a hidden area in the Fairy Glade. In Rayman Origins, this ability became available as a power, obtainable by saving Edith Up, the nymph of the Gourmand Land. However, the blue elves are replaced by funnels in this game, though both bear strong resemblance in eyes and wings.