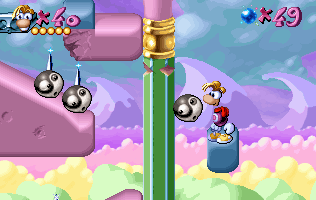 Two spiky yin-yangs (left) and a round yin-yang (right).

Yin-yangs are items found in Picture City in the original Rayman game, Rayman Junior and Rayman Designer, where they are titled Ying-yang. There are two types of yin-yang. The round yin-yangs, known as a Releasable steady ying-yang pick in Rayman Designer, can be used in a similar to plums: they bounce endlessly and can be used as platforms, and Rayman can punch them to move them about. The spiky yin-yangs, known as Prickly ying-yang in Rayman Designer, can be transported in the same way, but they hurt Rayman if he touches their spikes and they cannot be used as platforms. All yin-yangs have a pair of eyes. They can often be found suspended in mid-air, where they hang until dislodged by a blow from Rayman's telescopic fist, after which they will bounce endlessly. Unlike plums, yin-yangs cannot be used to incapacitate enemies or travel across water – they will sink and disappear if they fall into the lakes of ink.

It is unclear why this Taoist symbol should appear in Picture City, a land themed mainly after art supplies.