Glob Plumber shares the same look as Globox, however, he wears blue overalls and a green shirt, much like Luigi from the Super Mario series.

This hero explores the Glade of Dreams looking for green pipes that he believes would lead him to secret chambers full of coins! Hum, I’ve already heard that story somewhere...
—In-game description, Rayman Legends

In Rayman Legends he is unlocked once 28000 Lums have been collected in the Wii U and Nintendo Switch versions. 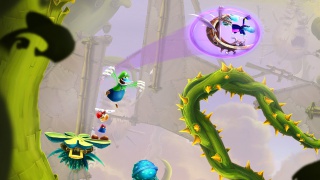