Emma is a playable character from Rayman Legends, Rayman Adventures and Rayman Mini. She is the sister of Ursula, the princess of 20,000 Lums Under the Sea and is the eighth of ten princesses that Rayman and his friends must rescue.

Emma and her sister Ursula are very alike, but with a few exceptions. While her helmet also has antennae, unlike the other princesses, her entire outfit is bright orange-yellow in color, and she has long, brown hair.

Ursula's little sister is also an amazing spy, but she's more used to secret missions on exotic islands in the middle of the ocean. That explains this flashy outfit!
—In-game description, Rayman Legends, Rayman Adventures

In Rayman Legends she is unlocked once the level The Shaolin Master Dojo in 20,000 Lums Under the Sea has been completed. 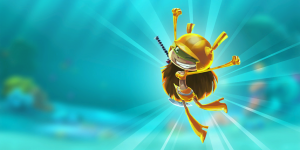 In Rayman Mini she is unlocked for 13 electoons.