Poglox is one of the playable characters in Rayman Legends, Rayman Adventures and Rayman Mini.

Poglox appears to be the naked version of Globox. His skin is similar to that of humans' because normal Globox is naked already. He also dons a leaf in the place of his crotch. A similar skin of Rayman called Rayomz appears in the same game.

No one really knows who this guy is, but he's famous for wandering half naked in the Glade of Dreams. People are capable of doing crazy things to become famous!
—In-game description, Rayman Legends, Rayman Adventures

In Rayman Adventures he can be purchased for 500 gems. 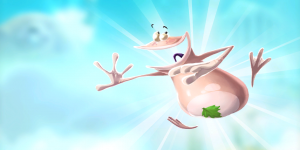 In Rayman Mini he is unlocked for 6 Swag Coins.