Ray Vaas is one of the playable characters in Rayman Legends, and one of the characters based on Rayman's animated model, he was only capable of being obtained by special code given to players who preordered the Xbox One version of Rayman Legends. He is unlocked by default in the Nintendo Switch version. Ray Vaas returns in Rayman Adventures and Rayman Mini as a purchasable costume.

Ray Vaas shares the same look as Rayman, however, his haircut and outfit are identical to that of Vaas Montenegro of Ubisoft's Far Cry 3. Far Glob is also based on this character.

Did I ever tell you the definition of insanity? Well, judging by this guy's outfit and haircut, he could certainly help you in that matter!
—In-game description, Rayman Legends, Rayman Adventures

In Rayman Legends Ray Vaas becomes playable after collecting 9000 Lums in the Xbox One version. He is unlocked by default in the Nintendo Switch version.

In Rayman Adventures Ray Vaas was available for 500 gems, but is as of now an exclusive costume in the Ubisoft Megapack and Primal Cry Pack, which can only be bought with real world currency. 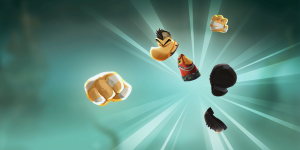 In Rayman Mini he is unlocked for 39 electoons.