The Teenseer is a playable character who appears in Rayman Adventures. He is a witch doctor that is said to have incredible abilities.

The Teenseer is a dark skinned Teensie who wears a green coat (presumably made out of grass or leaves) with cuffs made of grass that is similar to what his skirt is made of as well. As Shayman, Grovebox, and Amazonia do, the Teenseer has body paint on his face. The Teenseer wears a hat made of very colorful, tall feathers and wears a necklace.

The Teenseer is a powerful medicine man whose abilities come at the cost of his sense of smell... Nobody wants to tell him that's it's probably just that bone through his nose.
—In-game description, Rayman Adventures

In Rayman Adventures he can only be bought through the Limited Olympic Special Pack that includes him, Shayman, Grovebox, and Amazonia. As stated in this pack, Teenseer is a member of the "GOT", Glade Olympic Team. 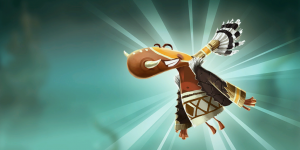